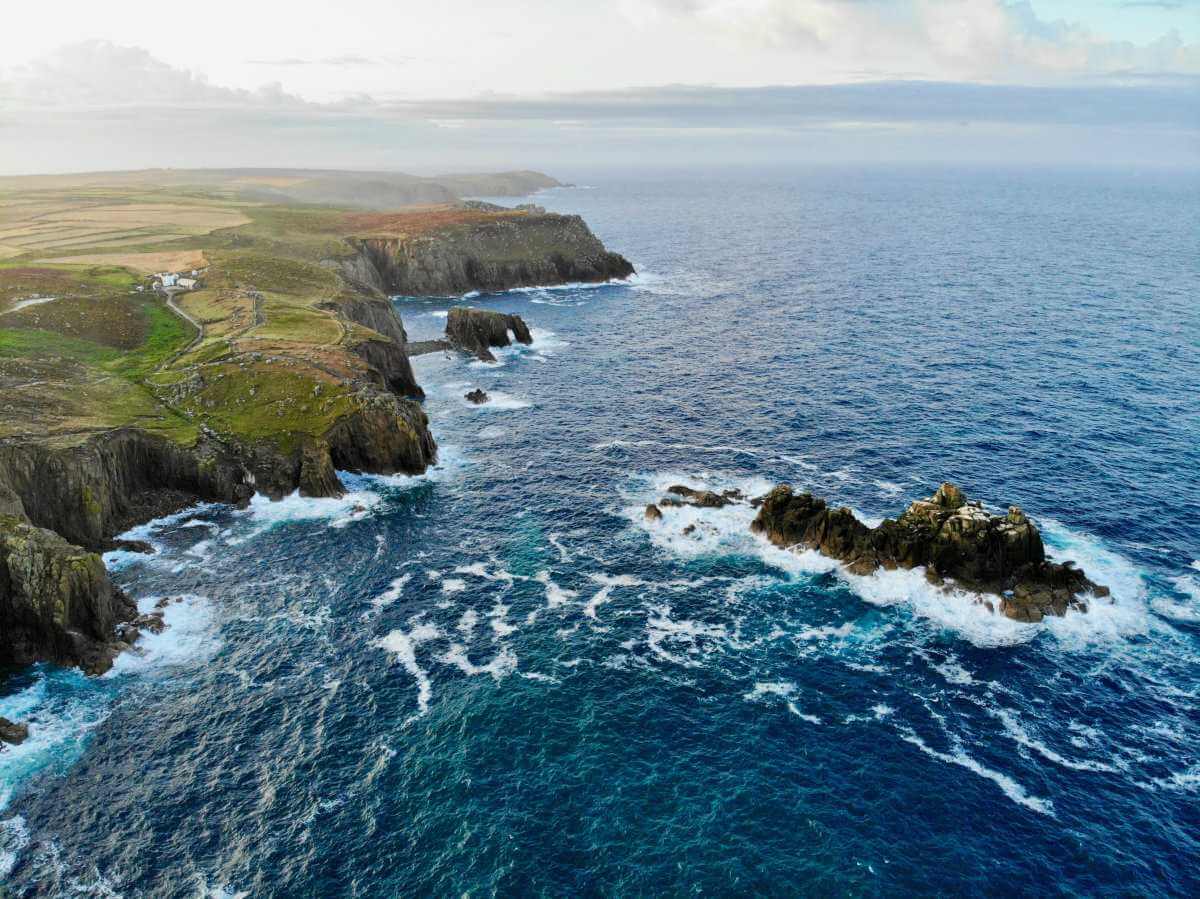 From the cathedrals of Salisbury to the surfing beaches in Cornwall, if you’re looking for places to visit in South West England then you have plenty to choose from!

Along with legends and locations concerning King Arthur, South West England is most known for having the longest coastline in England, so it’s very popular for those looking to enjoy the seaside.

In this post, we’ll be sharing our top picks for places to visit in South West England, including the famous Jurassic Coast and the national parks further inland.

We hope you enjoy learning about this beautiful and varied region but be sure to let us know in the comments which South West England must-sees we should add to our list!

Known as a cathedral city because of the magnificent Salisbury Cathedral, Salisbury has been welcoming visitors since 1227, and is filled with modern medieval buildings.

Near to modern Salisbury is the site of Old Sarum, an Iron Age fort which was taken over by the Romans and then made into an important town by the Saxons.

The original Salisbury Cathedral was built here, but a new one was built in the next valley over, and the town which cropped up around it was first called New Sarum, but eventually renamed Salisbury.

Salisbury Cathedral is home to the tallest cathedral spire in the country, as well as one of only four surviving original 1215 Magna Carta manuscripts. There are many beautiful buildings in the city that have survived since medieval times, along with the Salisbury Museum.

As well as information about the city, Salisbury Museum houses interactive displays about Stonehenge and, as the site is only 13 kilometres away from the city, it’s an ideal starting point before heading to the prehistoric monument.

Stonehenge is one of the most famous landmarks in the United Kingdom, often regarded as a British cultural icon, and a UNESCO World Heritage Site since 1986. This is all even more interesting when you realise that no one is actually 100% sure what it was built for!

Archaeologists believe that Stonehenge was constructed between 3,000 BC and 2,000 BC and it is regarded as the most architecturally sophisticated prehistoric stone circle in the world. It’s made up of an outer ring of standing stones topped with lintel stones (the horizontal ones on top) with a smaller ring of bluestones inside.

Parts of the site are aligned to the sunset of the winter solstice and sunrise of the summer solstice but the purpose of the construction is something that experts hotly debate to this day. It could have been used as a calendar of sorts, a holy site, or a meeting place.

Many myths surround Stonehenge, including ones related to the legendary British leader King Arthur. Some people think that magic or advanced alien technologies must have helped place the stones, since their origin is a long way away in Wales. No matter what the ‘truth’ is, Stonehenge is one of the most popular places of interest in South West England.

Nestled in a sheltered bay is the popular coastal resort town of Bournemouth, one of the best places to visit in South West England if you fancy a beach break.

Since it only takes around two hours or less to get to Bournemouth from London, the town attracts over five million visitors each year, who come to enjoy the beaches and nightlife.

With seven miles of sandy beaches and many resorts, it’s ideal for a relaxing stay, although there are also plenty of museums, art galleries, amusement arcades and an oceanarium to explore if you get tired of working on your tan!

As well as the beaches, Bournemouth is home to some beautiful Victorian architecture, including three Grade 1 listed churches, two piers (with multiple shops and attractions on them), the Pavilion Theatre (an art deco style building) and multiple stunning Victorian hotels to stay in.

Next door to Bournemouth is the pretty harbour town of Poole, another favourite spot for British beach-goers looking to get out of the cities.

Poole is home to a number of cross-channel ferry services and was also one of the main departing points for the Normandy Landings during WWII. Today Poole is the leaping-off point for getting to the Channel Islands of Jersey and Guernsey, as well as Saint-Malo in Brittany, France.

But you shouldn’t just head through Poole to get somewhere else, as the town itself also offers up Europe’s largest natural harbour, a historic old town and a history including sea captains and pirates! That’s not even mentioning the multiple blue flag beaches.

Poole is a great spot for trying your hand at water sports such as windsurfing and sailing, while the historic quayside is lined with excellent cafés and restaurants for having some of the freshest local seafood.

Originally founded in 1 AD and now a UNESCO World Heritage Site, the city of Bath is named after the Roman Baths that were built around the natural hot springs around 60 AD.

Bath became a popular spa town during the Georgian era, as it was believed the waters from the springs had curative properties. Apart from the baths, the city of Bath was made a UNESCO World Heritage Site due to the many gorgeous examples of Georgian architecture that are still intact today.

Bath Abbey, the houses which curve around a sweeping lawn known as The Royal Crescent, and the Circus, another set of curved Georgian townhouses, are three more popular attractions in Bath.

Famous English novelist Jane Austen also spent some time living in Bath, and fans of her work should definitely stop by the Jane Austen Centre to learn more about how her life in Bath inspired her works.

Bristol is the most populous city in South West England, straddling the River Avon and known for having a cutting-edge nightlife scene.

For centuries Bristol had a rich maritime history, and the famous pirate Blackbeard was allegedly born in the city. Nowadays the Bristol port is a hub for cultural attractions like museums, theatres and art galleries, as well as hip places to eat.

The Clifton Suspension Bridge sitting on the cliffs of the Avon Gorge is the symbol of Bristol, and attracts thousands of visitors each year to stroll across and enjoy the views over the city.

Some famous Bristol-born people include graffiti artist Banksy, Game of Thrones actress Maisie Williams (who played Arya Stark), and actor Cary Grant. The Bristol Old Vic Theatre School is one of the most respected in the country, actors such as Sir Patrick Stewart, Gene Wilder, Mark Strong, Jeremy Irons, and Pete Postlethwaite all trained there.

Widely regarded as the prettiest part of all England, the Cotswolds is an area filled with charming villages among rolling hills and meadows.

The region is rich in Jurassic limestone, which was quarried and used to build many of the houses, bridges, walls and other structures, in the well-known golden coloured Cotswold stone.

The county of Cornwall is one of the most interesting places to go in South West England. It is simultaneously the most westerly county in England as well as the only county to only have one neighbouring county (Devon). Cornwall is also home to the most southerly (Land’s End) and most westerly (Lizard’s Point) spots in England.

Cornwall is famous for its stunning beaches, which draw many surfers to the area. It’s also an area often associated with legends of King Arthur, with Tintagel Castle (where Arthur was supposedly conceived), Slaughterbridge (where Arthur defeated Mordred but was wounded), Camelford (possible location of Camelot) and Dozmary Pool (where Arthur told Sir Bedivere to return Excalibur to the Lady of the Lake) all being popular locations for fans to visit.

Other attractions worth seeing are the open-air Minack Theatre, perched on the Cornish cliffs, and St. Michael’s Mount, a tidal island with a historic castle, garden and community, that looks a lot like Mont St. Michel in France, although it’s actually bigger.

Cornwall is also well known for its delicacies such as Cornish pasties, Cornish fudge and Cornish ice-cream. The famous ‘Stargazy Pie’ is a Cornish pie where the heads of actual fish poke up through the crust as though they’re stargazing!

Glastonbury is a town in South West England that might be most famous for the Glastonbury Festival, although, while the festival takes its name from the town, it is actually held in the nearby town of Pilton!

Glastonbury is another place in the region often associated with King Arthur, as coffins bearing his name and that of his wife Guinevere were found at Glastonbury Tor in 1191. Glastonbury Tor (pictured below) is the hill beside the town of Glastonbury where the roofless St. Michael’s Tower is all that remains of a medieval church.

The hill of the tor was originally surrounded by the River Brue on three sides, so it looked like, and was often called, an island when the fens surrounding it flooded. It was also called the Isle of Avalon, which is why it was also thought to be the location of ‘the’ Avalon from Arthurian Legend.

Last, but certainly not least, on our list of the best places to visit in South West UK is the county of Devon, the only county that borders Cornwall and which is also renowned for its fabulous beaches.

Devon’s coastline is home to many popular resorts, hence why the area is often called the ‘English Riviera’. The inland part of Devon is also worth exploring, with the beautiful Dartmoor National Park located within its bounds, along with much of the Exmoor National Park.

The cities of Plymouth and Exeter are great for nightlife and culture while the entire region is good for foodies. In fact, the Devonshire cream tea, with scones, jam and cream, is believed to have originated in Devon. In Australia and New Zealand they actually just call it a Devonshire Tea!

Have we missed any of your favourite places to visit in South West England?