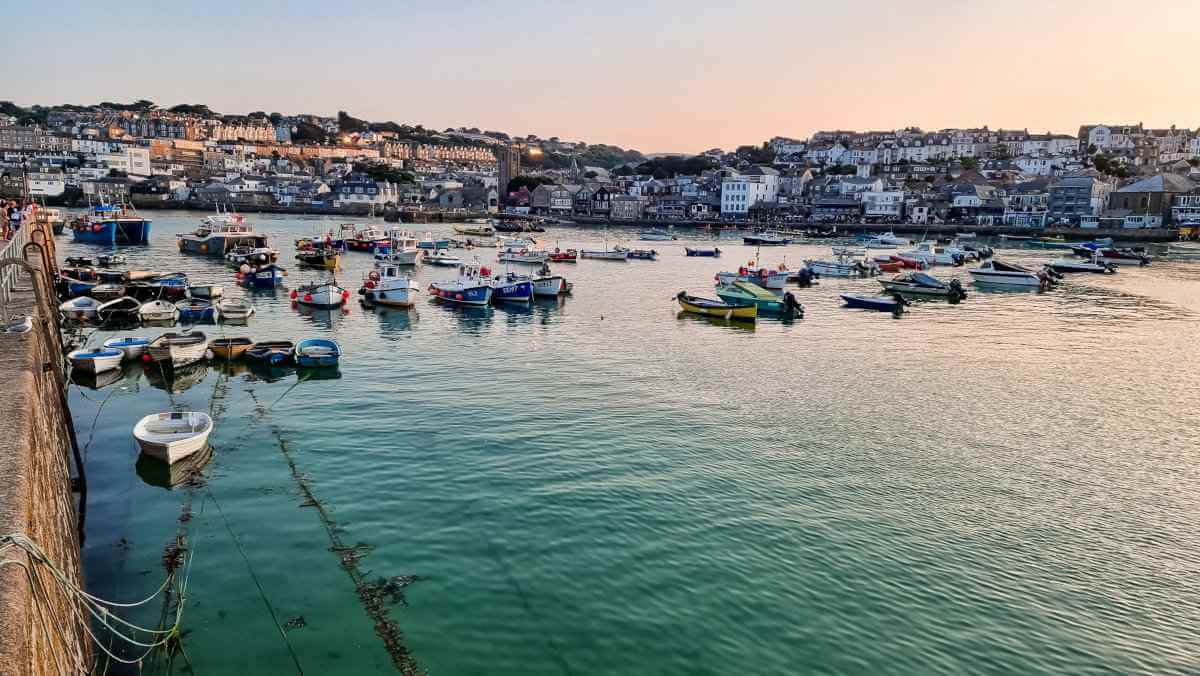 From incredible beaches to fascinating gardens, those heading to Cornwall will find plenty of interesting and beautiful places to explore.

Cornwall is most known for its rugged coastline but there is much more to see when visiting England’s southwestern tip.

In this post, we’ll be sharing our top picks for places to visit in Cornwall, including the best beach resorts and unusual Cornwall attractions.

We hope you enjoy learning about this stunning region and be sure to let us know in the comments which Cornwall must-sees we should add to our list!

Surfers will usually agree that Newquay is one of the best places to visit in Cornwall since it’s often called the UK’s surf city. It’s located on Cornwall’s North Atlantic Coast, where the winds and swell make for prime surfing conditions.

There are many excellent beaches in and around Newquay that are perfect for families, which is why it’s such a popular beach resort destination. Fistral Beach is the best for surfing, with surfing competitions held there for around 20 years. Newquay is also home to many surf shops as well as places to hire surfboards or take lessons.

Even visitors who aren’t into surfing will enjoy the beaches, while Newquay is also home to both an aquarium and a zoo. Fishing trips depart from the pretty harbour, while the Trenance Gardens and Boating Lake provide a charming spot to relax if you need a break from the sand!

St. Ives is one of the most beautiful places to go in Cornwall and another stunning location known for its beaches. There are four excellent beaches within walking distance of the town centre, and more further afield.

But beaches are not the only thing to enjoy in St. Ives.

Tate St. Ives is the St. Ives branch of the Tate Gallery and displays modern art, with a focus on the St. Ives School of Painters. There are also plenty of cute beach cafés in St. Ives, along with charming shops in the jumble of cobbled streets.

Visitors can also enjoy fantastic coastal views if they catch the St. Ives Railway to St. Erth or venture across to The Island (which is actually a headland) for views over the town. Seal Island is located 5km west of St. Ives, and home to a colony of grey seals, which can be visited via boat trips.

One thing Cornwall has in abundance is beautiful coastal towns and Falmouth is another one worth a mention. Located on Cornwall’s southern coast Falmouth is known for its deep natural harbour, and more pretty beaches, of course!

Falmouth is also home to the National Maritime Museum Cornwall, where visitors can learn all about the maritime history of Cornwall. The Falmouth Art Gallery is one of the best places in southwest England to see art, from impressionism to surrealism, maritime art and children’s book illustrations.

Pendennis Castle is located on the mouth of the River Fal and was originally constructed by Henry VIII in the 1540s. Once an artillery fort, Pendennis now hosts many fun activities for families, like medieval joust days.

Saint Michael’s Mount is one of the most popular and famous Cornwall attractions, probably because it looks like something out of a fairytale!

It’s a small tidal island in Mount’s Bay with a castle, terraced garden, church, harbour and small village crammed into 57 acres of land. It resembles the famous Mont-Saint-Michel in France, although that island is only 17 acres in area!

St. Michael’s Mount is accessible via walking at low tide, or a boat is needed when the water cuts off the causeway. Stunning views of the island can be enjoyed from the ‘mainland’ but a day to fully explore the island itself is better.

PRACTICAL INFORMATION FOR VISITING: You do need to book tickets ahead of time to visit St. Michael’s Mont, especially if you want to go inside the castle. During the period between 1st October – 31st March the harbour and village can be visited for free but make sure you check the website for more details/prices.

Porthcurno and the Minack Theatre

The open-air Minack Theatre near Porthcurno is one of the most stunning Cornwall destinations you can visit, especially if you enjoy seeing live performances. What’s more incredible is that it was mostly built by one woman!

Rowena Cade bought the Minack Headland in the early 1920s and built Minack House as her home. She offered her cliff-top garden for an open-air performance of The Tempest and then decided she needed to build somewhere for them to stage it and for guests to sit. She spent most of her life building the theatre that’s there today, with some help, of course.

The Minack Theatre is located just outside the small town of Porthcurno, which used to be the point where many underwater telegraph cables came ashore. Visitors who are interested in this history might also like to visit the PK Porthcurno (Porthcurno Telegraph Museum).

Land’s End is a headland in Cornwall that’s famous as the most westerly point of mainland England, along with being home to some pretty incredible scenery and cliff-top walks.

There is a tourist centre at Land’s End which includes fun activities for children, a farm, a hotel, a model village, a gallery and a number of shops/cafés. There’s also a famous signpost showing the distance from Land’s End to places like New York and John O’Groats in Scotland.

The ‘First & Last House’ (pictured below) is a historic house located on the cliffs of Land’s End. It got its name since it’s either the first or last house you would see when arriving or leaving England. Now you can get some nice Cornish ice cream there!

One of the most unusual places to visit in Cornwall is the weirdly named Lizard peninsula! While Land’s End is the most westerly point in England, Lizard Point is the most southerly point on the British mainland.

The area around the town of Lizard is filled with spectacular scenery and many protected areas. There’s a series of jagged rocks off the coast of the Lizard called the Manacles, which have caused numerous shipwrecks in the area. Now the ‘Graveyard of Ships’ is a popular spot for diving, partly due to the wrecks and also because the water visibility is excellent.

The Lizard is also a great spot for wildlife watching in Cornwall, with dolphins, seals, birds and sometimes whales to be seen from the coast. Of course, there are some fabulous beaches to enjoy too.

Port Isaac is a picturesque fishing village located on the northern coastline of Cornwall that’s most famous as the filming location for the British medical comedy-drama ‘Doc Martin’.

While many ‘Doc Martin’ fans flock to see the doctor’s home at Fern Cottage, the town is popular with those who haven’t even seen the series, as it’s so pretty! Traditional white-washed houses lead down cobbled and winding streets to the harbour while the southwest coast path provides stunning views over the town and surrounding countryside.

There are many lovely shops, cafés, restaurants and bars to visit in Port Isaac, as well as some nice beaches. Port Isaac is also the home town of the Fishermen’s Friends, a folk music group that sings sea shanties, and often performs at the main harbour on Fridays in summer.

The Lost Gardens of Heligan

For those who might be wanting a break from Cornwall’s many beaches, there are also plenty of gorgeous gardens to explore inland, including the intriguing Lost Gardens of Heligan.

These gardens were originally created around the 18th-century but fell into neglect after the First World War. In the 1990s a restoration project took place, which became the subject of a number of books and television shows. Nowadays the gardens offer many enchanting and romantic sights with quite a few notable highlights.

Along with a beautiful Italian garden and the only pineapple pit remaining in Europe, the Lost Gardens of Heligan are famous for two giant plant sculptures. The Mud Maid and The Giant’s Head (pictured below) are both made from rocks and plants – now there’s something you don’t see every day!

Tintagel Castle is one of the most popular Cornwall tourist attractions for people who are interested in the legend of King Arthur. The British cleric Geoffrey of Monmouth claimed in his History of the Kings of Britain that Tintagel was where King Arthur was conceived.

Nowadays Monmouth’s work is not considered reliable, but the lure of Tintagel Castle remains! There are only castle ruins to explore on the peninsula of Tintagel Island, but the views are spectacular and other attractions have been added over the years.

A rock cave below the castle is known as Merlin’s Cave and can be explored at low tide, while the bronze statue Gallos is also a popular attraction. The Tintagel Castle Beach Café is a wonderful spot for a traditional Cornish cream tea too!

The Eden Project is perhaps one of the most unique things to see in Cornwall. Technically a botanical garden, the Eden Project is made up of a series of adjoining domes that look like something out of a science fiction film.

Located in a reclaimed china clay pit the size of 30 football pitches, the Eden Project houses two main biomes inside the hexagonal inflated domes. Inside one dome is a rainforest biome, which is the largest indoor rainforest in the world! Inside the other is a Mediterranean biome and there is also a 30-acre Outdoor Garden.

Even visitors who are not that excited by plants will find the Eden Project a fascinating place to visit, as there are many beautiful sculptures, exhibits about where different products come from, a rainforest canopy walkway and indoor waterfalls.

Have we missed any of your favourite places to visit in Cornwall?