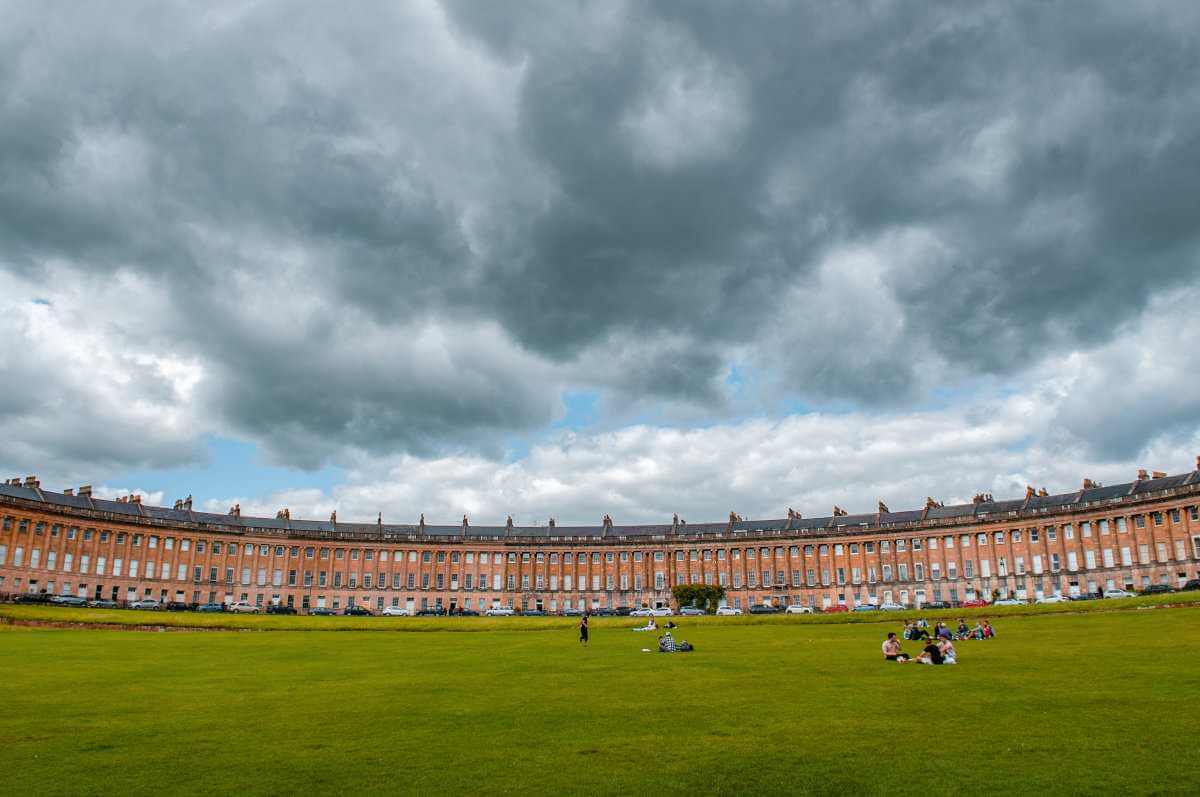 From gorgeous Georgian architecture to stunning riverside scenery, those looking for places to visit in Bath are truly spoiled for choice.

Bath is most known for the Roman Baths from which the city received its name, but there is much more to explore in this beautiful city than just the baths.

In this post, we’ll be sharing our top picks for places to visit in Bath and brilliant places to see nearby.

We hope you enjoy learning about this historic piece of Somerset, and be sure to let us know in the comments which Bath must-sees we should add to our list!

Of course, we have to start with Bath’s number one attraction, the Roman Baths that gave the town its name. There were natural springs in the area even before the Romans came to England, but it was they who built a temple between 60-70 AD on the site.

After the temple’s construction, a bathing site was also built over the next 300 years and the town that surrounded it was known as Aquae Sulis. While the baths fell to ruin after the Romans left, they were redeveloped several times over the years, leading to a revival of popularity as a spa city, especially in the Elizabethan period.

It was believed for many years that bathing in the waters was good for one’s health, although the waters have been off-limits for bathing since the 70s, as the water is no longer safe. Interested visitors can still visit the Baths to see the famous building and waters, as well as museum exhibits all about the history of the town.

Directly next door to the Roman Baths is Bath Abbey, a former Benedictine Monastery that was built using the distinctive yellow Bath stone that can be seen throughout the town.

Bath Abbey was founded in the 7th-century, although the building you see today dates from the 16th-century. It is a beautiful structure, built in the perpendicular Gothic style, with many gorgeous stained-glass windows and a fan-vaulted ceiling.

It is a working church though, so make sure you check ahead of time if there will be services happening during your planned visit.

One of the coolest parts of Bath Abbey can actually be seen from outside; a sculpture on the west front showing angels climbing a ladder to heaven up the side of the building. This represents the ladder that Jacob dreamed about in the Book of Genesis.

The British novelist Jane Austen (who wrote Pride & Prejudice and Sense & Sensibility, among others) lived in Bath for around five years of her adult life. Indeed, two of her novels (Persuasion and Northanger Abbey) are actually set in Bath.

Fans of Austen will definitely want to stop by the Jane Austen Centre, which is one of the most popular Bath tourist attractions. It’s located in a beautiful Georgian townhouse on the same street where Austen once lived and gives visitors a glimpse into life in Regency England.

The Jane Austen Centre features staff in costume to help explain Austen’s life, plus visitors can even dress up in Regency attire and get a photo with the Jane Austen waxwork on display. The Regency Tea Room located upstairs is also a wonderful spot for some tea and cake!

The Circus is the name given to a ring of Georgian townhouses in Bath that create a circle (with three entrances) around a circular park. It was designed by the well-known English architect, John Wood, the Elder and was constructed between 1754-1768.

John Wood designed many notable buildings in Bath (and beyond) but was inspired by the circular design of Stonehenge when creating the Circus, which is regarded as his masterpiece, although he died before seeing it completed.

The three entrances (rather than four) mean that visitors will always see the houses as they arrive, instead of another road.

The houses all have spectacularly carved friezes on them, representing nautical symbols, masonic symbols, the arts and sciences. There was once a well on the green in the middle, but now there are trees dating from around 1810.

The Royal Crescent is another impressive set of terraces in Bath, located at the other end of Brock Street from the Circus. These terraced houses were designed by John Wood, the Younger, who was the son of the John Wood who designed the Circus.

Obviously, since it’s called a crescent, the Royal Crescent is laid out in a crescent shape looking over the stunning Royal Victoria Park. It is one of the best examples of Georgian architecture in the United Kingdom.

Today, the 30 townhouses contain a number of flats, 10 intact townhouses, the Royal Crescent Hotel & Spa and the No. 1 Royal Crescent Museum. At this museum, visitors can see how Georgians lived at the time.

The facade was also used to depict the Featherington House in Netflix’s Bridgerton.

The Pulteney Bridge is not the only bridge in Bath crossing the River Avon, but it is certainly the prettiest, as well as one of the most unusual places to visit in Bath.

The bridge is quite distinctive because it is one of only four bridges in the world (along with the Rialto Bridge in Venice, Ponte Vecchio in Florence and the Krämerbrücke in Erfurt) which have covered shops across the entire bridge, on both sides. The Pulteney Bridge was completed in 1174 and was designed by Robert Adam, a British neo-classical architect.

One of the best views of the Pulteney Bridge can be seen while walking along the Grand Parade. The southern side of the bridge (facing the Parade Gardens) is the most picturesque since it is built with limestone in the Palladian style. The northern side is not as pretty, but still interesting to see. Under the covers, visitors can find florists, jewellers, cafés and more.

For the eager fashionistas among you, be sure to visit the Fashion Museum in Bath, which is currently located within the Assembly Rooms (designed by John Wood, the Elder) although the museum will be moved to a new location in 2023.

The Fashion Museum is one of the best places to visit in Bath if you are at all interested in the history of fashion, as it has examples of fashionable clothing from the 16th-century to the present day. Along with shirts and dresses you can expect to see exquisite gloves as well as shoes from through the ages – including some famous modern shoes!

Each year since the museum opened in 1963 a “Dress of the Year” is also displayed, showing the work of prominent modern designers like Giorgi Armani, Ralph Lauren, Alexander McQueen and Donatella Versace.

Nestled between the River Avon and Bath Abbey are the Parade Gardens, one of the most charming things to see in Bath, especially if you need a break!

The Parade Gardens are not huge but offer a lovely spot to sit and enjoy views over the river to the Pulteney Bridge with the weir before it, or a wander among the flower displays. In summer each year there is a 3D display which is always fun to see.

It does cost a small fee to enter the Parade Gardens (except for Bath residents) of £2 but there is a surprising amount to see in the 2 1/2 acres of garden. Along with a café, there are a number of sculptures in the garden, including one of Prince Bladud and the Pig, referencing the tale of King Lear’s father Bladud, who discovered the springs’ healing powers, according to legend…

A Sally Lunn is a type of bun or teacake that is thought to have originated in the town of Bath and Sally Lunn’s is THE place to go in Bath if you want to try one!

Sally Lunn’s Historic Eating House is definitely one of the oldest houses in Bath, although the claims that Sally Lunn was a Huguenot who came to Bath and invented the bun are not supported by any documents. That doesn’t, however, mean that Sally Lunn’s is not a must-visit Bath attraction.

The Sally Lunn bun is kind of a cross between a bun, a cake and a bread, making it the perfect blank canvas to pair with a variety of spreads, jams, and toppings – both sweet and savoury. Touristy as it may be, the buns here really are delicious, and well worth trying!

The Holburne Museum was Bath’s first public art gallery and it is housed in what was once the Sydney Hotel. Behind the museum, there are also the beautiful Sydney Gardens for visitors to enjoy. Together, the museum and gardens form one of the best Bath destinations.

The main part of the collection at the Holburne Museum came from the private collection of Sir William Holburne, although it has grown over the years. On display are many impressive paintings (including a number by British artist Thomas Gainsborough), along with examples of porcelain, silver, china and sculptures.

If you feel overwhelmed by the art then you can enjoy a drink or meal in the Garden Café while looking out over the Sydney Gardens. If you’re wondering why the Holburn Museum looks familiar, the front facade was also used as Lady Danbury’s home on Netflix’s Bridgerton!

Prior Park Landscape Garden was originally designed as a landscape garden surrounding Prior Park, a neo-Palladian house built for Ralph Allen by John Wood, the Elder.

Today the Prior Park building is part of Prior Park College, but the land surrounding it is owned by the National Trust as it played a large part in influencing the ‘English landscape garden’ style in Europe.

If you walk to the top of the hill you will be rewarded with stunning views over the greenery down to the Palladian Bridge with Bath city in the background.

There are buses that will take visitors to the park since currently there is no public parking. It also costs a small fee of £5 to enter but in summer particularly it’s a wonderful spot for a walk and/or a picnic.

The Palladian Bridge is the most famous feature, built as a copy of the one at Wilton House near Salisbury.

Have we missed any of your favourite places to visit in Bath?