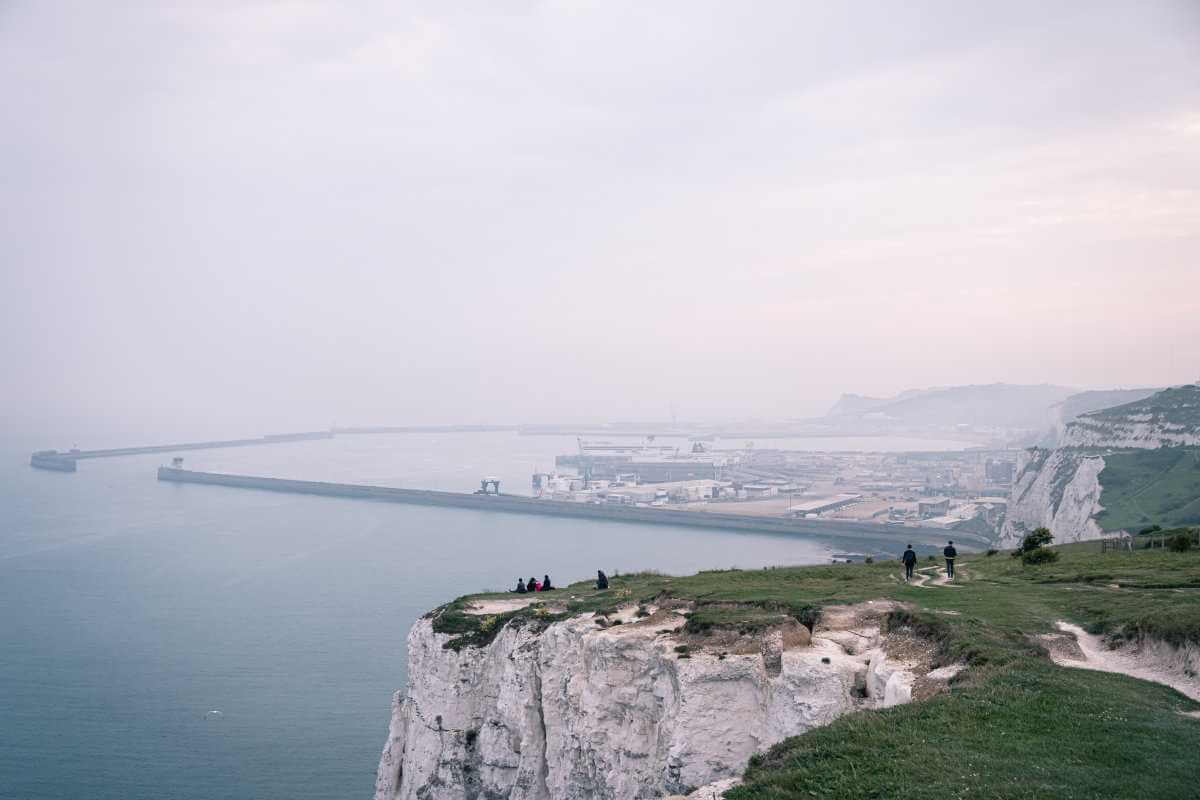 From the royal town of Windsor to the white cliffs of Dover, if you’re looking for places to visit in South East England then you are truly spoiled for choice!

Along with the city of London (which you can read about in this post), South East England is most known for its countryside, as well as the ports where many ships depart or arrive when crossing the English Channel.

In this post, we’ll be sharing our top picks for places to visit in South East England, including the seaside city of Brighton, University City of Oxford, and the best castles/palaces in the area.

We hope you enjoy learning about this fascinating and famous region, but be sure to let us know in the comments which South East England must-sees we should add to our list!

At just 76km south of London, Brighton is the most populous seaside resort in England. It makes for a fantastic seaside day-trip, but there’s enough to see and do in the area to warrant a longer visit.

Brighton is often referred to as the unofficial gay capital of the UK, as it’s one of the least religious parts of the United Kingdom, and very supportive of LGBTQ rights.

Main attractions include the beaches (of course), Brighton Palace Pier and the Royal Pavilion; a former royal palace with Indo-Saracenic architecture and Oriental interior.

When you hear the word Windsor you probably either think of Windsor Castle or the House of Windsor, right? Windsor is a market town, but it’s also home to Windsor Castle, one of the official residences of the British Monarch, and one of the most popular places of interest in South East England.

Windsor Castle is the longest-occupied palace in Europe, originally built in the 11th century and used by the reigning monarch since the 12th century. Current Queen, Elizabeth II, uses it as her royal home as well as a ceremonial location. Parts of the castle are also open to visitors, while the Changing of the Guard ceremony takes place on Thursdays and Saturdays.

Southampton is a very important port city on the south coast of England, being a point of departure for both the Titanic and the Mayflower (before it was forced to return to Plymouth), as well as many of the largest cruise ships in recent years.

When the Normans first came to England, Southampton became their most important port to connect France and England. Today Southampton retains the longest surviving stretch of medieval walls in England, and the Bargate is a major site to see.

Visitors who are interested in the maritime history of the city will also want to see the Southampton Maritime Museum, as well as the SeaCity Museum, which has dedicated exhibitions to the Titanic.

Southampton is also home to many excellent art galleries and theatres, so there is always something going on, including regular festivals or cultural events.

Often called the ‘City of Dreaming Spires’, Oxford is most famous for its world-renowned Oxford University, which is the oldest university in the English-speaking world. The city is also home to stunning examples of English architecture, so it has a very distinct look and feel.

Oxford has been home to royalty and scholars for over 800 years. Many visitors come to explore the most well-known parts of the University, such as the Radcliffe Camera, Christ Church Cathedral and the Bodleian Library. The city is also home to many museums, art galleries and theatres, so there is plenty to do.

Fans of Oxford-educated authors are often drawn to the city, with previous alumni including Oscar Wilde, J.R.R Tolkien, C.S. Lewis, Philip Pullman and Lewis Carroll (who was very inspired by Christ College when writing Alice in Wonderland).

Locations in Oxford have also been used for notable scenes in the Harry Potter films, so many Potterheads are also excited to visit!

Most famous for the main cathedral, the city of Canterbury is a UNESCO World Heritage Site and one of the most visited cities in the United Kingdom.

Canterbury Cathedral is one of the oldest and most famous Christian structures in England, as well as the seat of the Archbishop of Canterbury. The cathedral became a site of pilgrimage for many after the martyrdom of Thomas Beckett; the Archbishop who was murdered in 1170 by followers of King Henry II.

Geoffrey Chaucer’s famous 14th century classic The Canterbury Tales is based on stories told by pilgrims heading to Canterbury Cathedral to visit the shrine of Saint Thomas Becket.

As well as the stunning cathedral, it’s worth taking time to explore The King’s Mile in Canterbury – a quirky street with ancient (and often crooked) buildings – as well as The Beaney House of Art and Knowledge (usually just called The Beaney), a charming house of curiosities.

Another Cathedral City, Winchester is most famous for its cathedral, for being the first capital city of England and the seat of King Alfred the Great.

Winchester Cathedral (full name Cathedral Church of the Holy Trinity, Saint Peter, Saint Paul and Saint Swithun) is the longest medieval cathedral in the world. It attracts more than 365,000 visitors each year, many of whom come to see the burial place of novelist Jane Austen.

Winchester is also home to the remains of Winchester Castle, which has on display a famous replica of King Arthur’s Round Table. For more information about the history of Winchester, head to the City Museum.

Dover is a town and ferry port located at the point where the British channel is most narrow, so it’s often where travellers catch a ferry to get to and from France.

The coastline surrounding Dover is very unique and memorable, with chalk deposits and high cliffs. The White Cliffs of Dover are one of the main reasons visitors come to Dover, if they’re not simply transiting through on their way to somewhere else. There are also many beautiful coastal walks to enjoy the views.

Because the English channel is at its narrowest between Dover and Cape Gris-nez (next to Calais in France), it was also an important bastion against invaders. Dover Castle was founded on the hills above the port in the 11th century, and often dubbed the “Key to England” because of its defensive significance throughout history.

Today Dover Castle is an interesting spot to learn about its medieval history as well as the role it played during WWII. Dover Museum is similarly fascinating, and home to the world’s oldest surviving sea-going vessel, a 3,000 year old Bronze Age Boat.

Blenheim Palace is a gorgeous country house in Oxfordshire, that’s a UNESCO World Heritage Site as well as being the only country house in England, that’s not owned by a bishop or a royal, to bear the name of palace!

It is most famous for being both the birthplace and ancestral home of Sir Winston Churchill, but there are many fascinating aspects of the building to explore if you visit.

There are museums and exhibitions throughout the stately home, where visitors can learn all about the history of the people who have lived here. The grounds are just as spectacular, with a maze and multiple beautiful gardens. There are also lots of activities aimed at children.

PRACTICAL INFORMATION FOR VISITING: Do make sure you check the website ahead of your visit for opening information, as the palace is occasionally closed for private events.

Similarly to Southampton, Portsmouth was a very important port for defence in England, and is one of the most well-known ports in the world. It was a major departure point for the D-Day Landings in WWII, and is currently still home to the largest dockyard for the United Kingdom’s Royal Navy.

Visitors interested in maritime history will definitely want to explore Portsmouth, especially the Historic Dockyard where the Mary Rose (a raised Tudor ship) and HMS Victory (Lord Nelson’s 18th-century flagship) are both docked. Other museum sites include the National Museum of the Royal Navy and The D-Day Story.

The Spinnaker Tower (pictured below) is a 170 metre landmark tower in Portsmouth, with observation decks at three different heights. The popular seaside resort of Southsea is also part of Portsmouth, with beaches and two piers with amusement arcades making up the main attractions, along with Southsea Castle.

Most famous for being the childhood home of Anne Boleyn, Hever Castle is a romantic 13th century building with enchanting gardens.

Originally built as a country house, Hever Castle was the seat of the Boleyn family, so Anne Boleyn grew up there with her brother and sister. After the death of Anne Boleyn’s father, the castle came into possession of Henry VIII, who later gave it to Anne of Cleves as part of their marriage annulment settlement.

Today the castle is a tourist attraction, where fans of British history can see the rooms where both Anne Boleyn and Henry VIII slept, Tudor paintings and antique furniture. The gardens are also stunning, having been considerably upgraded over the years.

PRACTICAL INFORMATION FOR VISITING: Do check the website for current events and exhibitions, as well as opening times. The castle is open daily in spring and summer, five days a week in autumn but closed over the winter months.

The other incredible castle that draws many visitors to the South East of England was recently made famous for appearing as Downton Abbey in the television series (and films) of the same name.

Highclere Castle is technically an English country house, but it’s a Grade I Listed Heritage property and the seat of the Earls of Carnarvon. The current Countess of Carnarvon has published several books about the history of Highclere and its residents, and even runs her own blog about life in the real ‘Downton Abbey’!

The house and gardens are open to visitors during the summer months, as well as on special occasions like Christmas and Easter. There’s also a permanent Egyptian exhibition since the 5th Earl of Carnarvon discovered Tutankhamun’s tomb with Howard Carter in 1922.

A popular holiday destination since the Victorian era, the Isle of Wight is the largest island in England, and known for having a very mild climate. Even The Beatles’ song “When I’m Sixty-Four” famously references renting a cottage on the Isle of Wight in summer.

Queen Victoria actually built her own summer home, Osborne House, on the Isle of Wight, and to this day the island receives more than two million visitors each year!

Along with the natural beauty of the beaches and sights like The Needles, the Isle of Wight also hosts a number of popular festivals. The Isle of Wight Festival is one of the biggest rock music festivals in the world, while Cowes Week is one of the world’s longest-running regattas, drawing in 8,000 competitors each year to sail on the Solent.

PRACTICAL INFORMATION FOR VISITING: The quickest way to reach the Isle of Wight is via hovercraft from Southsea, but it can also be reached by ferry or catamaran from the ports of Southampton, Portsmouth and Lymington.

Have we missed any of your favourite places to visit in South East England?