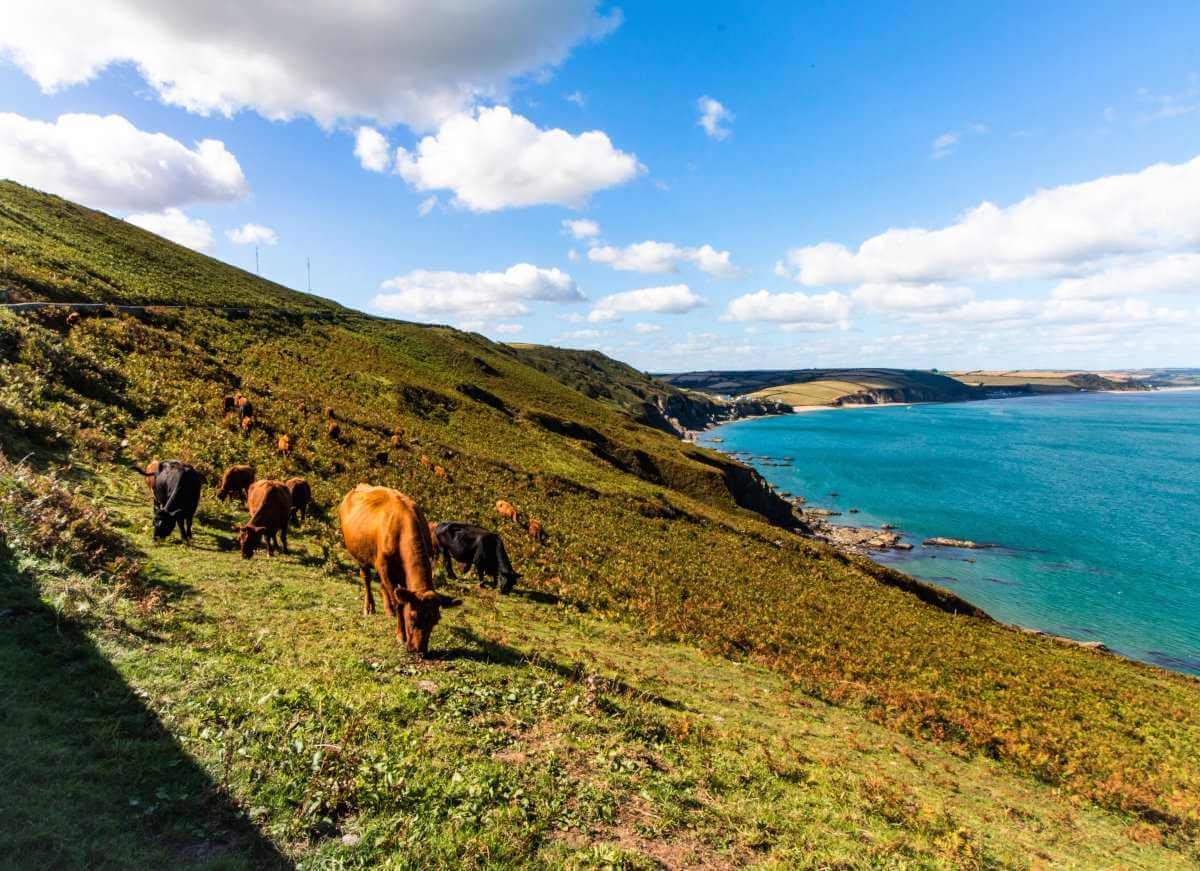 From the incredible Jurassic Coast to stunning inland national parks, those looking for places to visit in Devon are well and truly spoiled for choice.

Devon is most known for the “English Riviera” resort towns but there is definitely more to this county than just beach resorts!

In this post, we’ll be sharing our top picks for places to visit in Devon, including the prettiest towns and natural sights.

We hope you enjoy learning about this popular holiday region and be sure to let us know in the comments which Devon must-sees we should add to our list!

Plymouth is a port city in Devon located on the mouth of both the River Plym and River Tamar. It’s famous as a shipping port, especially since it’s where the Pilgrims departed on the Mayflower to establish Plymouth Colony in what is now America.

Visitors to Plymouth should not miss out on exploring the historic area of the Barbican, with narrow cobbled streets, a 16th-century Elizabethan House and the Elizabethan Gardens. Plymouth is also home to the largest aquarium in the United Kingdom, as well as the Plymouth Gin Distillery.

Just outside Plymouth is the gorgeous Saltram House, a historic country house that’s an excellent example of Georgian architecture and filled with original decor. Saltram House was also one of the main filming locations for the 1995 film Sense and Sensibility.

Those interested in art and history will find Exeter to be one of the best places to visit in Devon for the perfect combination of both. Located inland from Exmouth on the River Exe, Exeter is most famous for its beautiful cathedral.

Exeter Cathedral was founded in the 11th-century and features stunning stained-glass windows as well as a gorgeous astronomical clock. It’s also home to the longest uninterrupted medieval stone vaulted ceiling in the world, so it draws many admirers.

Art lovers will also enjoy the Royal Albert Memorial Museum & Art Gallery, which includes collections of zoology, anthropology, archaeology, and geology, along with fine art. South of the city is Powderham Castle, a fortified manor house that is open to the public and often hosts concerts in the grounds.

Just down the river from Exeter is the town of Exmouth (named so since it’s located on the mouth of the River Exe). Exmouth is surrounded by gorgeous beaches and also marks the western edge of the Jurassic Coast World Heritage Site.

Visitors to Exmouth can enjoy many water sports such as sailing, paddle-boarding, jet-skiing and wind-surfing. Those who prefer a quieter holiday can stroll along the traditional promenade and learn about the town’s history at the Exmouth Museum.

Slightly to the east of Exmouth is the World Of Country Life, an open-air museum and park with vintage vehicles and animals. North of Exmouth is one of the more unusual places to visit in Devon; A La Ronde – a quirky sixteen-sided house with seashell mosaics inside!

Torquay is one of the most popular Devon destinations you can visit, which makes sense since there is so much to see and do in this seaside resort town! It became popular as a seaside resort in the 19th-century, especially during the Victorian era. Together with Paignton and Brixham, it’s known as the English Riviera.

The mild climate makes Torquay a popular spot for holidayers, along with the many attractions and museums to explore. Visitors can learn about local history at the Torquay Museum, explore prehistoric caves at Kents Cavern or just enjoy the beaches with funny names like Babbacombe and Oddicombe.

Next to Babbacombe Beach is a cute model village (complete with a dragon and castle), as well as Bygones: a museum that recreates a Victorian shopping street with many interactive displays.

The English novelist Agatha Christie was also born and grew up in Torquay. Fans can walk the Agatha Christie Mile to see landmarks associated with the best-selling fiction writer of all time.

Not far from Torquay is Agatha Christie’s holiday house, one of the most popular Devon tourist attractions, not only with fans of her work. The building is a lovely example of Georgian architecture and the gardens are also beautiful, as are the views over the River Dart.

Agatha Christie and her second husband Max Mallowan bought the Greenway Estate in 1938 and they both spent their summers there until their respective deaths. Christie’s daughter then also lived there until her death in 2004, and gifted the property to the National Trust in 2000. The garden was open to the public while she still lived there but it was only after her death that the entire property opened to the public.

While Agatha Christie didn’t write any of her novels at Greenway (because it was for family holidays) some of her works were set on the estate, including Five Little Pigs and Dead Man’s Folly.

PRACTICAL INFORMATION FOR VISITING: Greenway House is open daily from 10.30am-5pm between February and October but only open on weekends November and December. You do need to pay to visit and for parking so make sure you check the website before going to see prices and time-slots.

A little further down the River Dart from Greenway (and on the opposite side) is the town of Dartmouth, which is actually located slightly inland from the actual mouth of the river.

Dartmouth is another spot in Devon that’s ideal for partaking in watersports, either on the River Dart or nearby beaches. The town hosts many festivals, as well as the Port of Dartmouth Royal Regatta every August. The regatta features boat races, markets, fun fairs, community games, musical performances, air displays and fireworks over three days at the end of August.

The Dartmouth Museum houses displays on maritime history in a 17th-century merchant’s house, while there’s a heritage steam railway departing from the opposite side of the river to other towns on the Devon coast.

At the mouth of the Dart River is Dartmouth Castle, an artillery fort in a very picturesque spot which you can explore after a ferry ride. The castle also offers stunning views over the town from the top of the battlements.

If you’re looking for places to go in Devon that aren’t all about the beaches, then you won’t want to miss Dartmoor National Park. With a name like Dartmoor, you know the area is going to have lots of moors, but the national park is also known for exposed granite hilltops known as tors.

There are a number of towns within the borders of Dartmoor National Park, and Sir Arthur Conan Doyle’s Sherlock Holmes novel The Hound of the Baskervilles was famously set in Dartmoor. The area is popular for hiking, fishing, rock-climbing, cycling and wildlife-watching, as well as white water rafting and canoeing in winter when the rivers are higher.

Other notable attractions within Dartmoor include the beautiful Becky Falls and Buckfast Abbey, an active Benedictine monastery. Dartmoor Ponies are a hardy breed that originated in the area to withstand the extreme weather conditions and still live half-feral in the moors of the park.

Another spot in Devon for seeing wide-open landscapes is Exmoor National Park, which is partly located in Somerset to the west of Devon. While Dartmoor is located in the south of Devon, Exmoor can be found in the north and was once a royal hunting forest.

Exmoor’s coastline is particularly stunning, with cliffs cut by ravines and waterfalls. As well as some moors, Exmoor contains heaths, woodland and peat bogs, along with plenty of villages. One of the best ones to explore is Lynmouth, located in a gorge where the East and West Lyn Rivers converge. Cable cars working on gravity connect Lynmouth with the town of Lynton on top of the gorge.

Like Dartmoor, Exmoor is known for a breed of pony as well as sheep, deer, cattle, feral goats and the rumoured phantom cat “the Beast of Exmoor”. Seals can also be spotted off the coast around Lundy Island, often along with puffins and dolphins.

One of the must-experience Devon attractions is the historic South Devon Railway, a 19th-century steam railway that runs mostly along the River Dart between the towns of Totnes and Buckfastleigh.

Riding the train through the South Devon countryside makes for an idyllic day trip that feels like stepping back in time. At the Buckfastleigh station visitors can enjoy a traditional Devonshire cream tea in the refreshment rooms, buy model trains in the gift shop and explore the history of the train line in the museum.

Buckfastleigh is also home to the Buckfast Butterfly Farm and Dartmoor Otter Sanctuary, for wildlife-lovers who want to see cute otters in the sanctuary as well as pretty butterflies in the butterfly house!

If you are looking for the most picturesque things to see in Devon then you can’t go past the charming seaside village of Clovelly. It has a steep cobbled main street leading down to the harbour and beautiful views over the Bristol channel.

Clovelly used to be renowned for taking visitors up and down the steep main street on the back of donkeys (as traffic is banned) but these days visitors must either go by foot or use a Land Rover service. The local donkeys can still be visited at the Clovelly Donkey Stables just outside the village.

If you walk along the pebbly beach next to the harbour you will also come to the Clovelly Waterfall, a small yet lovely cascade. Clovelly is home to the Fisherman’s Cottage, a museum showing how fishermen’s families lived in the 1930s, as well as the Kingsley Museum; dedicated to the author Charles Kingsley. Kingsley grew up in Clovelly, going on to write The Water Babies and Westward Ho!

Perhaps one of the most unusual places to visit in Devon is the town named Westward Ho! And no, we’re not putting an exclamation mark in there for emphasis, it is part of the official name of the town!

Westward Ho! was also the name of a novel by Charles Kingsley (published in 1855), which helped boost tourism in the area around Clovelly, although it was actually (partially) set in Bideford, which is about a 20-minute drive from Clovelly.

The village of Westward Ho! was built specifically to capitalise on the tourism which came from the popularity of Kingsley’s novel, and make it an attractive seaside destination for Victorians.

This town is the only place in the United Kingdom to have an exclamation mark in its name, and one of only two places in the world, with the other being Saint-Louis-du-Ha!-Ha! in Canada!

Have we missed any of your favourite places to visit in Devon?