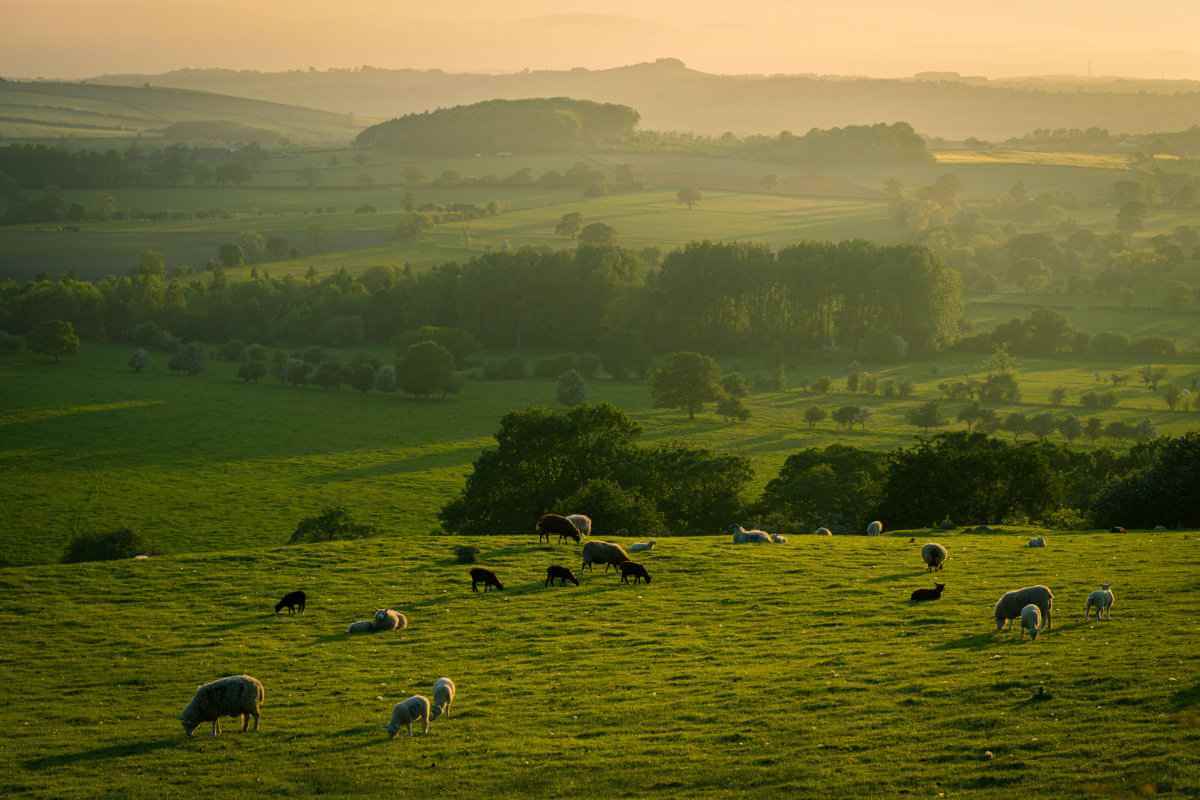 From the misty moors of North York to the green valleys of the Yorkshire Dales, those looking for places to visit in Yorkshire are in for a real treat.

Along with the cities of York and Leeds, Yorkshire is most known for its stunning landscapes, which inspired the likes of the Brontë family in their writing. It’s often called “God’s Own Country” by locals, due to its incredible natural beauty.

…But that’s not all that Yorkshire has to offer!

In this post, we’ll be sharing our top picks for places to visit in Yorkshire, including the prettiest towns and most stunning castles.

We hope you enjoy learning about the largest county in England and be sure to let us know in the comments which Yorkshire must-sees we should add to our list!

The city was originally founded by the Romans in 71 AD (they named it Eboracum), was settled by the Angles in the 5th century and was later taken by the Vikings in 866. It became the capital of Viking territory in England and was named Jórvík, which is where the modern-day name of York originated.

Many ancient structures still stand in York today, and are worth exploring, like York Minster (a Gothic Cathedral that dominates the city), York Castle and the medieval city walls. The city is also home to many excellent pubs and tea rooms, so there’s truly something for everyone.

A narrow medieval shopping street called The Shambles (pictured below) is also popular, especially with Harry Potter fans, as it’s believed to be the inspiration for Diagon Alley in J.K. Rowling’s famous books.

The agricultural area surrounding North Yorkshire is often simply called the Yorkshire Dales, as it is filled with many beautiful river valleys and hills, usually in myriad shades of green. The area is also one of the most famous Yorkshire tourist attractions.

The word ‘dale’ comes from the Old English dæl, which is simply another name for a valley (like dell). Yorkshire is known for these rolling valleys, usually dotted with sheep and quaint villages. There are numerous excellent walks to explore the valleys, waterfalls and limestone caves in the region as well.

This area is also home to the Yorkshire Dales National Park, which covers 2,178 square kilometres. Along with the natural beauty of the landscape, the national park is a prime location for astronomy; it was classified as an International Dark Sky Reserve in 2020; since it has very low light pollution it’s an ideal spot for star-gazing!

Often called the ‘unofficial capital of Yorkshire’, Leeds is the largest city in the county, and home to many landmarks; both natural and man-made.

With a history of producing wool and flax, nowadays Leeds is known for its music scene, shopping and proximity to the great outdoors. Many visitors to Leeds come to explore the very elegant and ornate covered shopping malls called The Arcades, where you can find high-end designer shops, boutiques and cool indie businesses.

On the outskirts of Leeds visitors can explore the ruins of 900-year-old Kirkstall Abbey, while the city centre is packed with fascinating museums, excellent bars and clubs, as well as many theatres. There’s a reason Leeds was bidding for the European Capital of Culture title for 2023!

Sheffield played an important role during the Industrial Revolution, with many inventions and technologies originating in the city. It was known all over the world as the ‘Steel City’ since it was the birthplace of stainless steel, and the sight of the smoking chimney stacks was once a symbol of Sheffield.

The 1997 British film “The Full Monty” was also set in Sheffield, with the aftermath of the steelworks being shut down as one of the main themes.

In the present, Sheffield is known for being one of the greenest cities in Europe, with a reported 4.5 million trees in the many parks, woodlands and gardens. It’s also home to many microbreweries, street art and cultural festivals, so it’s a great spot to visit in Yorkshire for some fun!

The Brontë sisters Charlotte, Emily and Anne are well-known poets and novelists who all hailed from the Haworth region of Yorkshire, which is often called “Brontë Country” today.

The sisters were raised in relative isolation in Yorkshire, with the windswept heather and wild moors inspiring much of their works.

Top Withens, ruins on the moor near Haworth, is believed to be the inspiration for Wuthering Heights (the location in the book of the same name by Emily Brontë), while Ponden Hall near Stanbury, is thought to have inspired both Thrushcross Grange in Wuthering Heights, as well as Wildfell Hall in The Tenant of Wildfell Hall (by Anne Brontë).

Nowadays, thousands of fans travel to the Brontë Parsonage Museum, in what was once the home of the sisters in Haworth. Even English writer Virginia Woolf visited the Parsonage in 1904, as it is a popular literary location in Yorkshire.

Another Yorkshire location with a strong literary history is the seaside town of Whitby, which was one of main locations in Bram Stoker’s Dracula.

The oldest and most well-known landmark in Whitby is Whitby Abbey, the ruins of a 7th-century Christian monastery (that later became a Benedictine abbey) that perches on the cliff above the town of Whitby.

Whitby is located at the mouth of the River Esk, so it’s a popular destination for those who like beaches, seafood and maritime history. Fishing and whaling fleets departed from Whitby’s port in the Middle Ages, and it’s also where Captain James Cook first learned to sail.

The mountains in Yorkshire known collectively as “The Three Peaks” are Pen-y-ghent (sometimes called Penyghent), Ingleborough and Whernside. They’re part of the Pennine Range, and all located within the Yorkshire Dales National Park.

If you only have time to tackle one peak, we recommend Whernside, as the route starts near the Ribblehead Viaduct (pictured below) and heads to the highest point in Yorkshire.

Harrogate is a spa town in Yorkshire that rivals Bath for its mineral springs. While Bath was originally built by the Romans, Harrogate became known as ‘The English Spa’ when its popularity grew in the Georgian era.

While a visit to the Turkish Baths is a must, Harrogate is also home to the famous Betty’s Tea Rooms, a café originally opened by a Swiss confectioner. Now it’s a Yorkshire institution, serving the best afternoon tea you’ll probably ever have. Make sure to try a Fat Rascal AKA a Yorkshire scone!

Along with spas and good food, Harrogate is also home to excellent shopping opportunities, as well as some very unique bars. If you’re looking for photo opportunities, the many pretty parks and gardens will tick the box, especially The Valley Gardens (pictured below) which is the town’s main park.

Obviously, Scarborough’s beaches are a must-see, particularly the popular South Bay Beach, right next to the town centre and sheltered under the Scarborough Castle ruins on the rocky promontory above. The Old Town area behind the harbour is also a delightful maze of cobbled streets filled with shops, cafés and pubs.

Along with spending time on the beach, eating seafood and exploring the castle ruins, Scarborough is a great Yorkshire destination for listening to orchestral music while enjoying the Victorian baths! The orchestra only performs in the summer months, but the spas are open year-round.

Knaresborough is one of the most unique towns in all of England, let alone Yorkshire. With medieval streets and stone staircases weaving their way up and down the hill, Knaresborough has hidden delights at every turn.

The picturesque viaduct over the River Nidd is just the tip of the iceberg when it comes to enchanting views. The ruins of Knaresborough Castle on the hill overlooks the town and viaduct, while Knaresborough is also home to the oldest tourist attraction to charge a fee in England; Mother Shipton’s Cave.

Mother Shipton was a legendary Tudor soothsayer and prophetess, who was reputedly born in the cave. There’s a petrifying well nearby, where any objects placed in the water will petrify (‘turn to stone’) due to the high levels of sulphate and carbonate in the water. It’s surely one of the most unusual places to visit in Yorkshire!

A wander through the town will also reveal a statue of Mother Shipton, while the area next to the river (pictured below) is absolutely enchanting, especially in spring or autumn.

If you think Castle Howard looks familiar then you probably saw it standing in for Clyvedon House, the Duke of Hastings’ country home on Netflix’s Bridgerton!

This stately home in Yorkshire has actually appeared in a number of films and television series’ though, including both versions of Brideshead Revisited as the titular Brideshead.

In real life, Castle Howard has been the seat of the Howard family for 300 years and took more than 100 years to complete. It’s now a major heritage attraction, with extensive gardens and an English landscape park to enjoy along with the opulent interiors.

There are multiple cafés and gift shops at Castle Howard, as well as a garden centre. The grounds and gardens are our favourites, particularly the Atlas Fountain, the Temple of the Four Winds and the walled garden.

PRACTICAL INFORMATION FOR VISITING: Check the website before planning your visit, as some parts are closed seasonally or for maintenance.

Have we missed any of your favourite places to visit in Yorkshire?