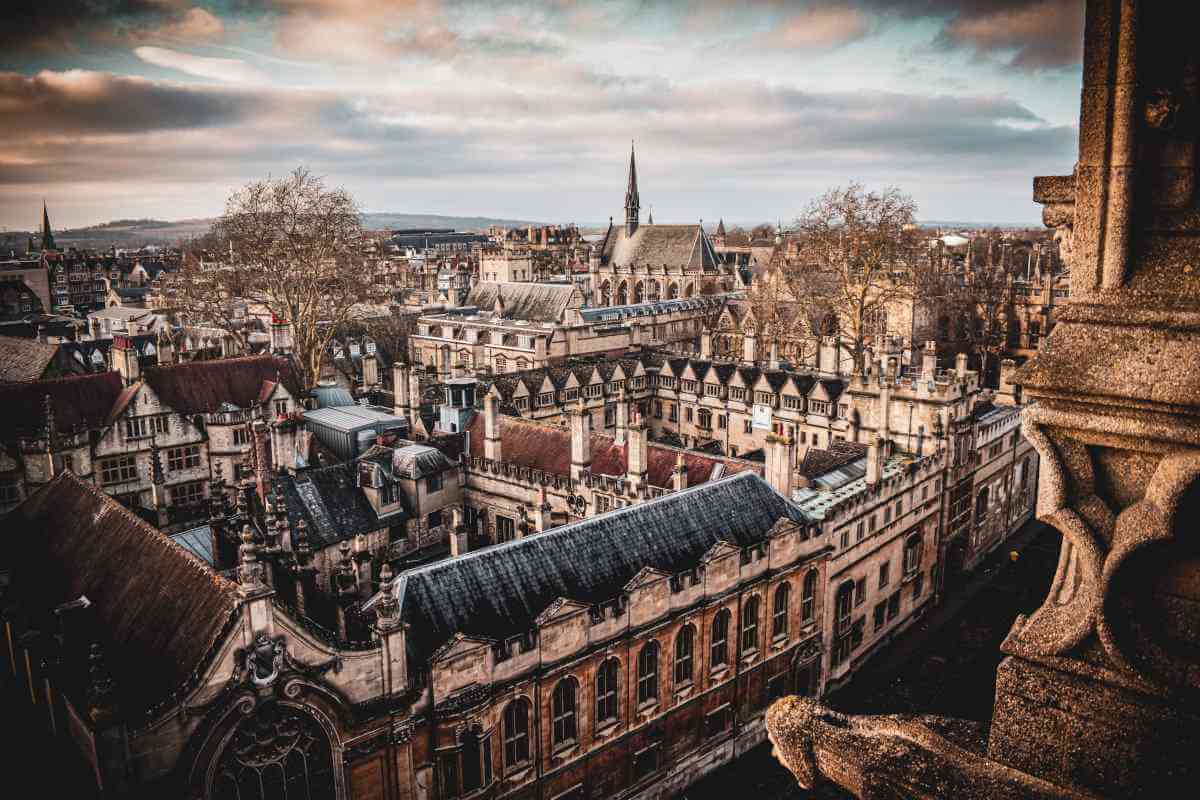 From the oldest English-speaking university in the world to a Guinness World Record-holding bookshop, those looking for places to visit in Oxford are truly spoiled for choice.

Oxford is most known for its stunning university, but there is more to explore in this historic city than just its university buildings.

In this post, we’ll be sharing our top picks for places to visit in Oxford including the best museums and pubs.

We hope you enjoy learning about this historic piece of Oxfordshire, and be sure to let us know in the comments which Oxford must-sees we should add to our list!

The Bodleian Library and Radcliffe Camera

As the main research library for the University of Oxford, the Bodleian Library is one of the most famous libraries in the world, as well as one of the oldest in Europe. It was first founded in the 14th and 15th-centuries, then re-founded under the patronage of Sir Thomas Bodley in 1598.

The Bodleian Library is housed in a group of buildings that together make up what is thought of as the ‘heart of Oxford’. One of these is the Radcliffe Camera, a round neo-classical building that originally housed the Radcliffe Science Library. Now it is one of the reading rooms of the Bodleian, as generally books cannot be removed from the library.

Parts of the Bodleian Library have famously been used in film and television, particularly in the Harry Potter films where the Divinity School was used to represent the Hogwarts hospital wing and Duke Humfrey’s Library stood in for the Hogwarts library.

PRACTICAL INFORMATION FOR VISITING: It is free to visit Blackwell Hall and any exhibitions at the Bodleian Library. To enter the Divinity School you need to pay £2.50 per person and it’s best to book your time slot online beforehand. You can only visit the interior of The Bodleian Old Library and Radcliffe Camera on a guided library tour, which takes half an hour and costs £9 per person.

Christ Church is one of the largest colleges of Oxford University, with multiple significant buildings that have led, in part, to it being the most popular college for visiting tourists and one of the best places to visit in Oxford. It’s also the only college with its own cathedral!

This college has an illustrious past, having been founded by Henry VIII in 1546 and producing many British prime ministers – in fact, more than any other college at either Oxford or Cambridge. This is also the college that Alice in Wonderland author Lewis Carroll attended, and parts of the college clearly inspired some of his work.

Christ Church contains the largest quadrangle in Oxford, as well as a famous bell tower (called Tom Tower) that was designed by Sir Christopher Wren. The Great Dining Hall inspired the dining hall at Hogwarts in Harry Potter, and parts of Christ Church were also used when filming scenes in the first two Harry Potter films.

PRACTICAL INFORMATION FOR VISITING: You absolutely need to book your timed ticket in advance online to enter Christ Church College. There may also be certain parts off-limits to visitors (as it’s a working college and cathedral) so make sure you check carefully before making your booking.

Victorian poet Matthew Arnold described Oxford as ‘the city of dreaming spires’ in his poem Thyrsis, because of the amazing architecture. Oxford is indeed home to many churches and cathedrals, as well as other buildings with tall towers or spires, but the church of St. Mary the Virgin might be the most important.

The University Church of St. Mary the Virgin is located in the centre of where Oxford grew as a university city. A church has been situated on this location for over 1,000 years and even today there are still services, so it’s one of the most visited Oxford attractions.

Fans of C. S. Lewis (who famously attended Oxford) will want to pop down the side alley of St. Mary’s Passage to see a wooden door bearing a lion and flanked by fauns, which is thought to have inspired the wardrobe door from The Lion, The Witch and The Wardrobe!

St. Mary’s spire is often called one of the most beautiful in England, but if you actually go up it, you will also be rewarded with some of the best views over Oxford, particularly of the Radcliffe Camera.

PRACTICAL INFORMATION FOR VISITING: It’s free to enter the church but you will need to pay £5 if you want to climb the tower.

The Ashmolean Museum of Art and Archaeology

Oxford’s Ashmolean Museum of Art and Archaeology (usually just called the Ashmolean) is just as famous as other parts of the city, as it is the world’s second oldest university museum as well as the oldest public museum in the United Kingdom.

It is named for the cabinet of curiosities donated to the university by Elias Ashmole in 1677. Anyone who enjoys a museum will not want to miss it, as today it houses many treasures of art and archaeology, from Egyptian artefacts to modern paintings. It’s truly one of the most fascinating Oxford destinations.

Along with the treasures on display, there’s a lovely rooftop restaurant where you can have lunch or afternoon tea while looking over Oxford. It’s free to enter the museum but booking your time slot beforehand is encouraged, especially if you wish to dine in the restaurant.

One of the rare things to do in Oxford that aren’t related to the university is a visit to the party ruined Norman castle that later served as Oxford’s prison. Today it is a historical site and hotel!

When William the Conqueror came to England there was a wooden moat and bailey castle on the location, which was later fortified with a stone keep. Today the keep is no longer standing, but the man-made mound where it stood offers views over the city, as does St. George’s Tower.

Visitors can also descend into the underground crypt while costumed actors make the experience fun for children. Additionally, if you’re staying overnight in the city then the Malmaison Oxford hotel in part of the old prison is definitely an unusual place to stay!

Often just called ‘the Theatre’, the Sheldonian Theatre holds a special place in the hearts of Oxford students as this is where all the graduation and degree ceremonies are held.

It was designed by Sir Christopher Wren who, of course, later went on to design other masterpieces such as St. Paul’s Cathedral in London.

The Sheldonian’s design was interesting in that Wren took a turn from the largely Gothic architectural styles in Oxford, instead creating a D-shaped structure much like a Roman theatre.

While these Roman theatres were usually roofless, that wouldn’t work in the British climate, so Wren had to devise a roof truss to avoid putting load-bearing columns into the main space. There is also a stunning ceiling fresco by Robert Streater which shows “truth descending on the arts and sciences to expel ignorance from the university”.

It’s not known exactly what the “Emperor Heads” outside the theatre are supposed to represent, but they are one of the most recognisable sights in Oxford!

One such myth which was debunked, is that there was a survey of the health of Oxford students a long time ago and it was found that those at Hertford College were the heaviest, so the bridge was closed to force them to walk more stairs. It’s also been suggested that the sighs respond to the sighs students make when receiving exam results!

The distinctive bridge is a popular Oxford tourist attraction and has even appeared in films such as ‘X-Men: First Class’, as well as the television series ‘Inspector Morse’.

Magdalen College (pronounced Mawdlin) is one of the most beautiful colleges in Oxford, as well as the only one with a deer park within the grounds!

It’s also one of the wealthiest and academically strong colleges with a bell tower that’s almost as famous as the one at Christ Church. On May Morning (May Day), the college choir sings from the top of this tower at 6am, which must be like hearing angels from the heavens…

Like most of the colleges, you can visit the buildings and grounds for a small fee (£7). Oxford Botanic Garden is located right next door, and is also another gorgeous spot for walking amongst gardens. Fans of Phillip Pullman’s His Dark Materials trilogy will also want to stop at Lyra and Will’s bench, which is located within the gardens.

The Oxford University Natural History Museum is one of the best things to see in Oxford, particularly if you like seeing animal and dinosaur skeletons. Best of all, it’s totally free!

As well as impressive skeletons, the museum houses collections divided into three sections: Earth Collections, Life Collections and Archive Collections. There are also statues of important scientists on the ground floor of the exhibition hall, while the hall itself is a spectacular square court with a glass roof, supported by cast iron pillars.

The museum’s logo is a dodo since the museum houses the only surviving remains of dodo soft tissue that exists anywhere in the world. It’s also thought that the 1651 Jan Savery painting of a dodo on display inspired Lewis Carroll when creating the Dodo character in Alice’s Adventures in Wonderland.

Bibliophiles heading to Oxford will doubtless have only one destination in mind, the famous and record-breaking Blackwell’s Bookshop.

Blackwell’s is now a British academic book chain, but the first ever shop was opened on Broad Street in Oxford and remains there to this day. One of the most impressive facts about Blackwell’s in Oxford is that it holds a Guinness World Record for the biggest bookselling room on the planet – the Norrington Room.

While Blackwell’s was a small family business in the beginning, its popularity led to the basement being extended so that the Norrington Room could be created. This room features FIVE KILOMETRES of shelving and more than 150,000 books!

While Oxford is home to a number of famous pubs, the Turf Tavern might be the most atmospheric. It’s located down a long winding alley just behind the Bridge of Sighs (if you have your back to the Bodleian Library) and is thought to have been around since the 13th-century.

The Turf Tavern has always been popular with Oxford students and a number of notable people have visited, or even set world records here!

Another famous pub worth visiting is the Eagle and Child. This is where a literary group known as The Inklings used to meet for lunch and to discuss literature. Members of The Inklings included C. S. Lewis as well as J. R. R. Tolkien, author of The Hobbit and the Lord of the Rings trilogy.

Have we missed any of your favourite places to visit in Oxford?