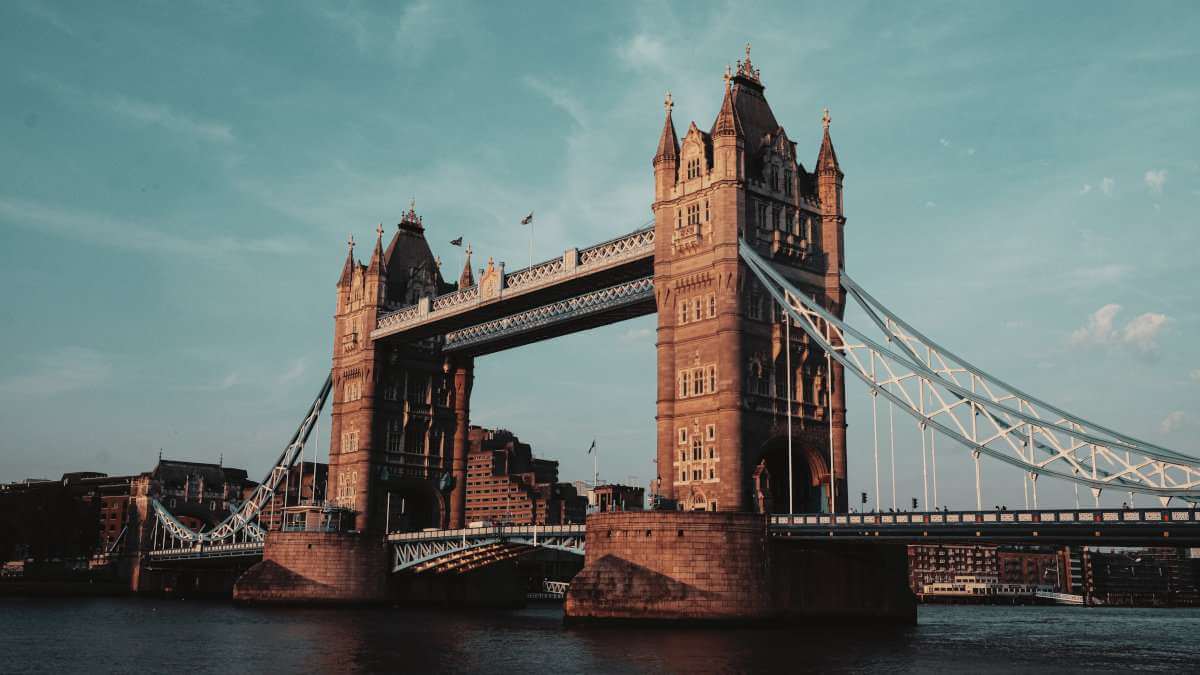 From Buckingham Palace to the iconic Tower Bridge, if you’re looking for places to visit in London then your only real issue might be seeing everything in a limited time!

Along with the British Royal Family and houses of Parliament, London is most known for its history, as well as a thriving arts scene.

In this post, we’ll be sharing our top picks for places to visit in London, including the most popular historic attractions and the best places for shopping or dining.

We hope you enjoy learning about this world-famous city, but be sure to let us know in the comments which London must-sees we should add to our list!

The Palace of Westminster and Big Ben

First things first, you can’t actually see ‘Big Ben’ in the below photo, because Big Ben is the nickname given to the largest bell inside the clock tower at the Palace of Westminster!

Often referred to as the Houses of Parliament, the Palace of Westminster is where the two houses of the Parliament of the United Kingdom meet, although it was originally a royal palace. It was the main residence for Kings in England until it was destroyed by fire in 1512. The royals then started to live in Whitehall, while the Palace was reconstructed and remained the home of Parliament.

The Palace of Westminster is one of the most recognisable London tourist spots, as it sits on the banks of the Thames next to Westminster Bridge.

It was rebuilt by Charles Barry in the opulent Gothic Revival Style and was designated as part of a UNESCO World Heritage Site in 1987.

The UNESCO World Heritage Site we mentioned above includes the Palace of Westminster, St. Margaret’s Church and Westminster Abbey, which is another one of the most visited London tourist attractions.

The official name of Westminster Abbey is the Collegiate Church of Saint Peter at Westminster. It was originally a Catholic Benedictine monastic church and then the cathedral seat of a Catholic bishop.

While it was no longer an abbey or cathedral after King Henry VIII’s reformation, it still gets called Westminster Abbey by most people!

William the Conqueror was coronated in Westminster Abbey and after him, every English or British monarch has been crowned in the abbey. It has also hosted sixteen royal weddings over the years, including that of Queen Elizabeth II (when she was still princess) to the Duke of Edinburgh and Prince William to Kate Middleton.

Many visitors to Westminster Abbey come to see the burial sites of famous and important people, with different sections for notable people such as Poet’s Corner where Geoffrey Chaucer was the first poet interred, while many other writers have memorial floor stones.

The abbey is also the resting place of many British monarchs, as well as scientists such as Isaac Newton, Charles Darwin and Stephen Hawking.

Buckingham Palace is one of the main London must-see attractions, as it is a highly recognisable location and one of the most important royal residences in the country.

It was originally a townhouse for the Duke of Buckingham but was purchased by King George III for his wife Queen Charlotte (yes, the King George and Queen Charlotte depicted in Netflix’s Bridgerton!). When Queen Victoria became queen in 1837, Buckingham Palace became the official London residence of the monarch.

Nowadays there is a stunning fountain and sculpture outside the gates of Buckingham Palace, the Victoria Memorial which is a monument to Queen Victoria. Many state events are held at Buckingham Palace, including formal dinners and meetings, while parts of the palace are also open to the public, such as the Royal Mews.

In summer the Queen holds three garden parties at Buckingham Palace, while the Changing the Guard is a formal ceremony of soldiers changing over guard duty of the palace and always attracts many crowds. Changing the Guard ceremonies take place daily in June and July but only some days the rest of the year, so check the schedule ahead of your visit.

The Tower of London and Tower Bridge

The Tower of London is a grand sight, one of the country’s most popular tourist destinations and a UNESCO World Heritage Site to boot.

The main castle (called the White Tower) was built by William the Conqueror and was famous over the years as a prison, although that was not its main purpose.

The Tower of London has served as many things throughout history, from royal residence to an armoury, a treasury and the home of the Royal Mint. Now it displays the Crown Jewels (when they are not being used) and 2.5 million visitors come to see them each year!

The Tower of London is located on the banks of the River Thames, and next to the site is Tower Bridge, the photo used at the top of this post. Often mistakenly called London Bridge, Tower Bridge was built between 1886 and 1894. It’s a moveable suspension bridge that also has interesting displays about its history to explore.

While the writer William Shakespeare was born (and is buried) in Stratford-upon-Avon (in the West Midlands), he was most associated with London, particularly since he worked with the Globe Theatre for many years.

Today, a reconstruction of Shakespeare’s Globe Theatre can be found very close to the original theatre’s location and is still used for performances of Shakespeare’s plays. There is also a museum inside the building, with lots of interesting history about the theatre and Shakespeare’s legacy.

A visit to Shakespeare’s Globe Theatre while in London is a must for any fans of the bard, even if you don’t get the chance to see a live performance.

It’s also neatly sandwiched between Borough Market and the contemporary art museum the Tate Modern, so all three make an excellent trio of things to explore while in Southwark.

St. Paul’s Cathedral is one of the most famous sights in London but also one of the best places to go in London for amazing views of the city!

The original Gothic church on the site was founded in AD 604 but was mostly destroyed during the Great Fire of London in 1666. The cathedral was rebuilt by Sir Christopher Wren in the English Baroque style, and its dome and spires are a major symbol of the London skyline.

Many famous events have occurred at St. Paul’s, including the funerals of Admiral Nelson, Winston Churchill and Margaret Thatcher, as well as the wedding of Prince Charles and Lady Diana Spencer. It is still a working church, with daily services, but tourists can also enter for a fee, and even climb to the highest point of the outer dome for panoramic views over London.

One of the most popular neighbourhoods in London is Covent Garden, an area centred around a former fruit and vegetable market located a short walk from Westminster and right next door to Soho.

Originally the garden of a convent (go figure!), the area became a popular market before falling into disrepute due to a large number of taverns and brothels operating in the area. The beautiful neo-classical building to cover the market was built in 1830 to help organise the market, which later became too busy and was moved altogether.

Now Covent Garden is a shopping and entertainment hub, as well as the home of the Royal Opera House and the London Transport Museum. There are numerous gift shops, cafés, restaurants and bars to explore in Covent Garden, and it’s also a prime spot to see buskers.

Trafalgar Square and the National Gallery

Located in between Covent Garden and Westminster is the plaza of Trafalgar Square, which commemorates the Battle of Trafalgar; the British naval battle where Lord Nelson’s fleet defeated Napolean’s French and Spanish fleet in 1805.

Lord Nelson died during the battle, and Nelson’s Column is the monument in the centre of Trafalgar Square which features a statue of him on a Corinthian column, surrounded by four lion statues. Trafalgar Square is a popular spot for visitors to relax and enjoy the fountains behind the column, but it is also a site where many political demonstrations are held.

Facing onto Trafalgar Square is the National Gallery, an art museum and one of the best places in London to visit for free. The building itself is beautiful, plus it houses more than 2,300 paintings from around the world, including many famous pieces from Van Gogh, van Eyck, Da Vinci, Rubens, and Carvaggio.

Most travellers to London will want to see Piccadilly Circus, the junction where Piccadilly meets Regent Street. This ‘circus’ (round junction) is well-known for the massive illuminated signs on one building and the famous Anteros statue (often mistakenly called Eros), but we urge you to explore further!

If you walk down Piccadilly road from the statue, you will eventually reach the Wellington Arch and Hyde Park Corner, although there are many notable places to stop at along the way, not least of which is Green Park.

Piccadilly is home to many grand hotels including The Ritz London, Park Lane, Atheneum and InterContinental. Prestigious shops worth a visit include the upmarket Fortnum & Mason, as well as Hatchards, which is believed to be the oldest bookstore in the United Kingdom.

On a map, Hyde Park and Kensington Gardens look like one large park, but the West Carriage Drive that cuts through the middle effectively marks the border between these two Royal Parks in London.

The Serpentine and Long Water Lakes also divide the parks, but both parks are stunning areas to walk, cycle, picnic, and even swim.

Hyde Park has been the site of many protests over the years, as well as concerts and large-scale events, like the Hyde Park Winter Wonderland, a yearly Christmas event that fills the park with rides, stalls, pop-up restaurants and bars, and much more!

Connected to Hyde Park is Kensington Gardens, which houses many important statues and monuments, including the Peter Pan Statue as well as the Albert Memorial. Kensington Gardens were once the private gardens of Kensington Palace, but are now open to the public.

And of course, Kensington Palace is a royal residence in London, currently the official home of the Duke and Duchess of Cambridge (Prince William and Kate), but many staterooms are also open to the public. Altogether, the two parks and palace make a wonderful day out enjoying things to see in London.

Greenwich is a borough of London located in the east of the city, on the River Thames. It has long been associated with England’s maritime history, while also housing multiple museums and sites of interest.

Other things to see at Greenwich include one of the most unusual places to visit in London: the Royal Observatory, where visitors can stand on both sides of the Meridian Line at once. The Riverfront of Greenwich is also home to the Cutty Sark, a preserved clipper ship from 1869 which can also be explored.

Have we missed any of your favourite places to visit in London?