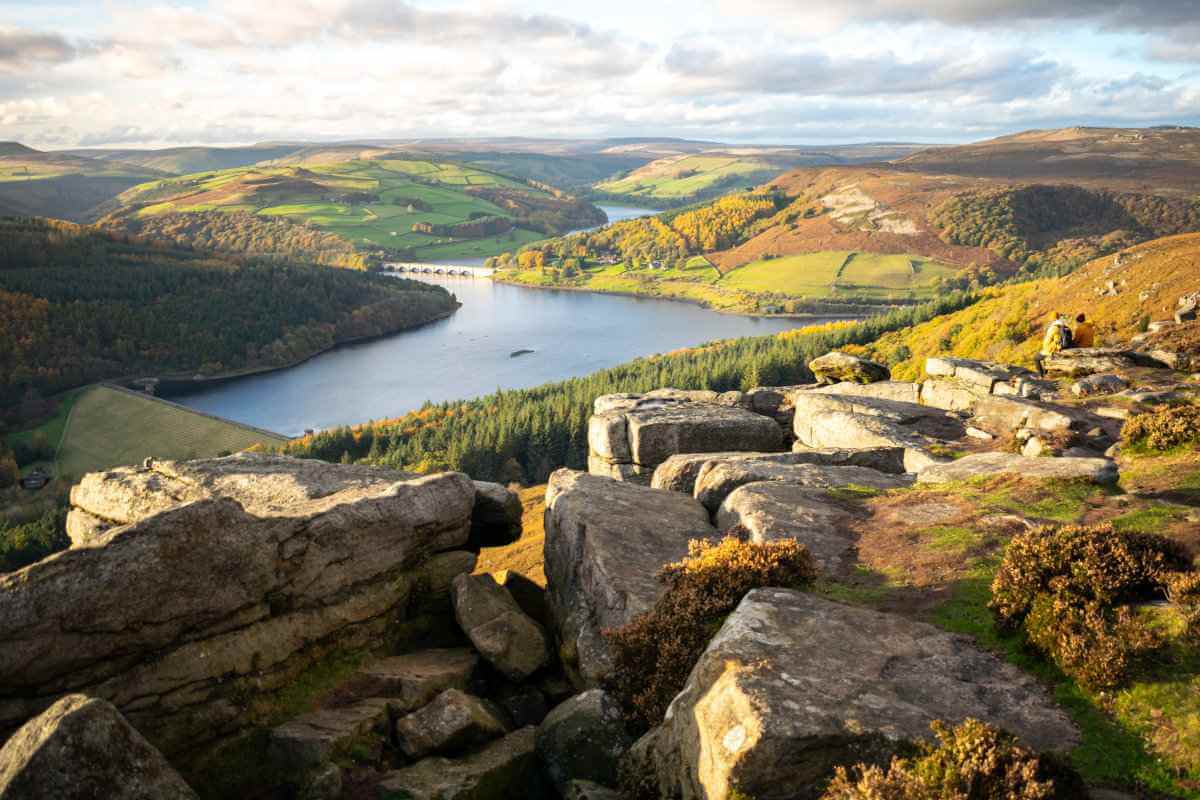 From Sherwood Forest to the Peak District, if you’re looking for the best places to visit in the East Midlands then you are truly spoiled for choice!

Along with the legends of Robin Hood, the East Midlands are most known for producing oil and limestone, as well as some famous foods.

In this post, we’ll be sharing our top picks for places to visit in the East Midlands, including the home of Batman!

We hope you enjoy learning about this unique region, but be sure to let us know in the comments which East Midlands must-sees we should add to our list!

Probably most famous for its links with British legendary figure Robin Hood (and his arch-nemesis, the Sheriff of Nottingham), Nottingham is a large city in the East Midlands with many sporting links – it was even named the ‘Home of English Sport’ in 2015.

Nottingham Castle is one of the main tourist attractions, although the original castle was demolished and replaced by a Georgian-era mansion. Below the castle is a series of caves, while museum and art collections are housed within the mansion. There are actually around 500 sandstone caves under Nottingham, which can also be explored via the Broadmarsh shopping centre!

Ye Olde Trip to Jerusalem is a pub built into the rock beneath Nottingham Castle, and it’s believed to be the oldest inn in England, serving ale to the crusaders on their way to Jerusalem in the 12th-century.

Nottingham is also a UNESCO City of Literature, with Lord Byron and D.H. Lawrence having links to the city. In particular, D.H Lawrence studied in Nottingham and Lady Chatterley’s Lover (perhaps his most famous work) was set in Nottinghamshire.

While Wollaton Hall is actually located in Nottingham, we believe it deserves its own entry as one of the best places to visit in the East Midlands. It’s an impressive and stately 16th-century Elizabethan country house surrounded by parkland.

Wollaton Hall was famously used for exterior shots of Wayne Manor (the home of Batman) in the film The Dark Knight Rises. The park is also regularly used for large outdoor events such as concerts and festivals, while the Nottingham Natural History Museum is housed inside the hall.

When major events are not on, the formal gardens and deer park are a delight to explore. There’s a beautiful lake, a camellia house and a botanical garden, plus you can enjoy spotting the red and fallow deer.

Fun Fact: the Nottinghamshire town of Gotham, which is located less than 10km away, was also the inspiration for Gotham City in the Batman comics!

While Nottingham has some links to the legend of Robin Hood, it is nearby Sherwood Forest that is most famous for its historic association with the legendary outlaw.

Originally a royal hunting forest, it was particularly popular with King John, the real-life brother of Richard the Lionheart, and one of the characters often included in stories of Robin Hood.

One of the major sights in Sherwood Forest is the Major Oak (pictured below), an oak tree that is over 1,000 years old and, according to legend, served as the hideout for Robin Hood and his Merry Men.

In the summer holidays, a Robin Hood festival is held over seven days in Sherwood Forest, with live re-enactments, song, dance, storytelling, sword-fighting, archery and plenty of stalls selling food, drink or crafts.

Like many British cities, Derby was originally settled by the Romans but changed hands between the Anglo-Saxons and Vikings during its history.

Derby is often described as one of the birthplaces of the Industrial Revolution, is home to part of the Derwent Valley Mills UNESCO World Heritage Site, was a centre of the British Rail Industry, and is a centre of transport manufacturing to this day.

The Museum of Making at the Derby Silk Mill (pictured below) was originally called the Derby Industrial Museum and is an excellent East Midlands destination to learn more about Derby’s industrial history.

Derby also makes a great base for exploring the Peak District, but the city itself is home to many museums, a cathedral, markets and other attractions that are worthy of some time spent enjoying the UK’s most central city.

Leicester is one of the oldest cities in England, with Iron Age settlements found by the Romans in AD 47 and fine examples of many different architectural styles from throughout the ages.

One of Leicester’s main claims to fame is that the body of King Richard III (the last king of the House of York) was found under a car park and excavated in 2012. His body was later buried at Leicester Cathedral and the King Richard III Visitors Centre is where visitors can learn more about this influential king.

Leicester is also a popular shopping destination, with an 800-year-old market and the winding cobbled streets called The Lanes, which are filled with independent boutiques, arcades and eateries.

Additionally, Leicester is home to the National Space Centre, a museum crammed with rockets, satellites, meteorites, and world-famous spacesuits.

The Peak District is one of the most visited East Midlands tourist attractions, and it covers a large area that extends beyond the borders of the Peak District National Park.

Today the Peak District draws many visitors who want to hike, climb, go caving or cycling and just enjoy the scenery. Even though it’s named for ‘peaks’, the area actually demonstrates more hills, valleys and gorges than sharply defined mountains.

As well as nature walks and wildlife spotting, this region has a number of charming towns to explore. Castleton is home to four ‘show caves’ (that are accessible to the public) and is a popular starting point for many easy walks.

Buxton is a charming spa town while Bakewell is, of course, the home of the famous Bakewell Pudding!

Lincoln’s Cathedral and Castle are the two major drawcards to this city, with the 11th-century Norman castle housing one of the 4 original copies of Magna Carta.

The 900-year-old Lincoln Cathedral was also built by the Normans and visitors still come from around the world to see its Gothic beauty and experience the daily choir services.

It’s also one of the most unusual places to visit in the East Midlands as the cathedral is also home to the famous Lincoln Imp – the stone carving of a mischievous imp in the Angel Choir.

Legend says this imp was a demon that was blown into the cathedral by a storm but was turned to stone by the cathedral’s guardian angels when it created too much mayhem! The imp is now known as the city’s unofficial mascot.

Apart from the castle and cathedral, Lincoln has some luxury high-end stores on the High Street, a lovely lake and marina called Brayford Pool, medieval buildings and The Museum of Lincolnshire Life to enjoy.

Northampton was historically known for its shoe and leather industry, so anyone who is passionate about fashionable footwear will want to visit the Northampton Museum and Art Gallery, a very unique East Midlands attraction.

This museum houses one of the world’s largest collections of historical footwear – more than 15,000 pairs of shoes, from Ancient Egypt to modern fashion, and everything in between! It includes famous pairs of shoes such as the platforms worn by the Spice Girls and David Beckham’s football boots.

There are also displays of art relating to footwear, as well as exhibitions about Northampton’s history and other kinds of artworks.

Northampton’s Guildhall (pictured below) is a Neo-Gothic delight and was designed by Edward William Godwin when he was just 28. Northampton was also where parts of the BBC sitcom ‘Keeping Up Appearances’ were filmed, while the city is the setting for both the film and musical ‘Kinky Boots’.

Just under 10km northwest of Northampton is the Althorp Estate; which has been the seat of the aristocratic Spencer family for more than 500 years and was also the childhood home of Princess Diana.

Charles Spencer is the current owner of Althorp, he’s the 9th Earl Spencer and the younger brother of Diana, who married the Prince of Wales. After her untimely death, her body was buried on a small island within the estate and there is also a Doric-style temple directly across from the lake for visitors to leave flowers if they wish.

The estate is only open to the public in July and August, so you would have to time your visit carefully if you wish to explore the house and gardens, but it’s worth a trip if you are in the area in summer.

We’ve mentioned that some famous foods originate in the East Midlands, and the town of Melton Mowbray is a true site of significance in this regard, even being called England’s ‘rural capital of food’.

The Melton Mowbray pork pie might be the town’s most recognisable treat, since it shares a name with the town, but Melton Mowbray is also the location of one of only six licensed makers of Stilton cheese. Foodies visiting the town will absolutely want to pay a visit to the Tuxford & Tebbutt creamery, as well as the Dickinson & Morris pork pie shop (pictured below).

On the first weekend of October each year, Melton Mowbray hosts the Melton Mowbray Food Festival, one of the biggest regional culinary festivals in the United Kingdom.

Along with yummy food, Melton Mowbray boasts a beautiful country park, a small heritage trail, some great pubs and an adorable miniature railway just outside the town.

Chatsworth House is a stunning country estate located on the east bank of the River Derwent, in Derbyshire. It’s been the home of the Cavendish family for over 500 years but is open to the public between March and September.

There are many opulent rooms to explore inside Chatsworth House, with works of art that span 4,000 years. The 105-acre garden boasts a canal pond, cascade, greenhouse, a rock garden and a maze.

Chatsworth House has been used to represent Pemberley in both the 2005 film version of ‘Pride & Prejudice’ and the television drama ‘Death Comes to Pemberley’.

The 2008 film ‘The Duchess’ starring Keira Knightley and Ralph Fiennes was about the real-life 5th Duke and Duchess of Devonshire who lived in the house and had an unusual arrangement with another woman. Parts of the movie were filmed on location at Chatsworth House.

Have we missed any of your favourite places to visit in the East Midlands?