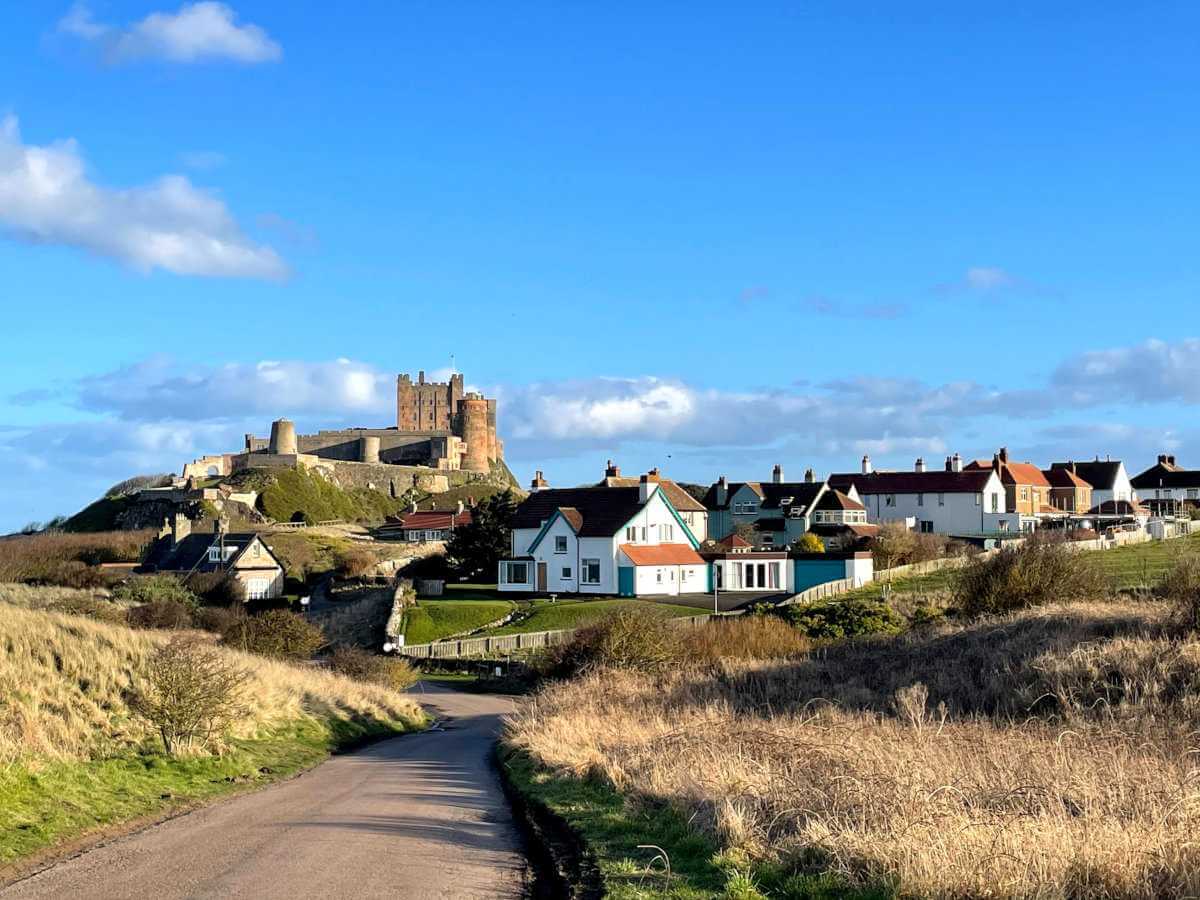 From beachside castles to unspoiled wilderness, those looking for places to visit in Northumberland have a wide range of choices.

Northumberland is most known for its wild scenery and many historic fortifications, but that’s not all there is to discover.

In this post, we’ll be sharing our top picks for places to visit in Northumberland, including the famous Hadrian’s Wall.

We hope you enjoy learning about this strategically important region and be sure to let us know in the comments which Northumberland must-sees we should add to our list!

The town of Alnwick is one of the most popular Northumberland destinations, partly because it’s home to the beautiful Alnwick Castle.

Alnwick Castle is the seat of the Dukes of Northumberland and has been used as a filming location for a number of films and television series.

It famously represented Hogwarts in the first two Harry Potter films and has also been used for filming Downton Abbey.

There are three main museums within the castle, as well as plenty of activities for Potterheads!

Next door to Alnwick Castle is Alnwick Garden, a stunning complex of formal gardens constructed around a main water cascade. There’s an incredible treehouse just outside the garden, that’s the largest wooden treehouse in the world and hosts weddings or other events. Alnwick Garden is also famous for its rose garden, cherry blossom garden and poison garden.

Northumberland was always an important region for defence, both during Roman times and later when England fought wars against Scotland. There are many fortifications and castles remaining to this day, one of which is the impressive Bamburgh Castle.

Built on a dolerite outcrop, there was a fort in the location before a castle, which passed between hands a number of times before being destroyed by the Vikings. It was then rebuilt by the Normans, before being bought by the Victorian-era industrialist Baron William George Armstrong.

Today the castle is open to the public with a number of museums and displays to explore inside, as well as stunning views of the coast from the battlements. You can also just go for a walk on Bamburgh Beach to take photos of the castle for free!

Also known as The Holy Island, Lindisfarne is one of the most interesting places to go in Northumberland for a variety of sights and history.

The island has been an important centre of Christianity since at least the 6th-century AD and is strongly associated with four different saints, three of which served as Bishops of Lindisfarne. Many visitors head to Lindisfarne to see the ruins of the priory and castle, or to birdwatch in the reserve surrounding the island.

Lindisfarne is a tidal island, meaning it’s possible to walk across at low tide. There’s a small village where people live on the island, with a number of pubs, cafés and accommodation options to explore. It’s particularly famous for a mead that was originally made by the monks using a secret recipe. You can try the mead at St. Aidan’s Winery.

Seahouses is a charming seaside village and one of the best places to visit in Northumberland for a seaside break.

Located about 20km north of Alnwick, Seahouses is a colourful and historic fishing village with a bustling harbour and plenty of shops to explore. It makes a great base to stay in while exploring nearby attractions like Bamburgh Castle and Lindisfarne, as well as the nearby Farne Islands.

The Farne Islands are a cluster of islands just off the coast near Seahouses, and the biologist/TV presenter Sir David Attenborough has even declared them his favorite spot to see nature in the UK! A boat trip to the islands makes for a wonderful day trip of spotting seals, dolphins, puffins and more.

One of the most unusual places to visit in Northumberland is Berwick-upon-Tweed, as it’s the most northerly town in England and sits just below the Scottish border.

Since it’s so close to the border, the town itself has changed hands between English and Scottish rule many times in the past. Nowadays the residents famously can’t agree whether they are truly Scottish or British!

Hadrian’s Wall actually makes up a number of exciting Northumberland attractions, as there are different sections to find all along the route where this defensive fortification once stood.

Originally built around AD 122, the wall once ran the entire width of England and assisted with the defence of the Roman Province of Britannia against the unconquered region of Caledonia to the north. Today there are many sections still intact where visitors can explore Roman forts, towns and museums.

PRACTICAL INFORMATION FOR VISITING: Many of the sites feature museums, visitor information and fun activities, so it’s just a matter of deciding which one, or ones, you want to visit! Check out this page for more info on Hadrian’s Wall sites in Northumberland.

Northumberland National Park is the northernmost national park in England, as well as being both the least-populated and least-visited of the country’s national parks. But that’s all the more reason to visit!

If you want to truly experience some of the wildest and most untouched landscapes in England, this is the park to do it in. The Northumberland National Park is also interesting in that it covers a number of different areas, including hills, moors and forests. The central section of Hadrian’s Wall is also located in the most southern part of the park.

The famous Pennine Way runs through Northumberland National Park, after starting in Edale in the Peak District. It’s often called the best known and toughest of Britain’s walking trails, eventually finishing up just below the Scottish border.

Located within Northumberland National Park is the Kielder Water and Forest Park, which contains the largest man-made forest in England, as well as the biggest man-made lake in Northern Europe!

The forest is made up of different conifer trees and is managed by Forestry England to provide timber for different uses while also protecting native wildlife. Kielder Forest is one of the best places in England to spot red squirrels as around 50% of the population lives there.

Other must-see spots in the area include Kielder Castle; an 18th-century hunting lodge built by the Duke of Northumberland which is now a great base to get information on things to do in the area, and the Kielder Observatory.

Kielder Observatory is an environmentally-friendly observatory powered by solar panels and a wind turbine. It’s also the best place in the UK to view the Milky Way, particularly since it’s located within the Northumberland International Dark Sky Park.

The waterfall of Hindhope Linn is definitely one of the most beautiful things to see in Northumberland. It’s located within Kielder Forest and is reached by a lovely round-trip walk.

The Hindhope Linn Walking Route actually stops at two waterfalls, Hindhope Linn and the difficult-to-pronounce Blakehopeburnhaugh Waterfalls. Both feature spectacular falls cascading into lush green dells, and the walk itself is not too taxing.

Along the way, walkers will get to see ancient Scots Pine and larch, while enjoying tranquil bird calls. The walk is often called Kielder Forest’s best-kept secret. There’s a small car park where the walk begins with a public toilet that’s not always open, so don’t rely on it.

Not to be confused with Ambleside in the Lake District, Amble is a sleepy harbour town located on the Northumberland coast at the mouth of the River Coquet.

The town is filled with places to eat yummy seafood, with brightly coloured beach huts and shops inside curved wooden pods. Amble is the perfect spot in Northumberland if you want a coastal holiday, as it’s right on the breathtaking Area of Outstanding Natural Beauty that stretches up the coast to Berwick-upon-Tweed.

Amble is all about endless beaches, drifting dunes and quiet bays, plus there are plenty of options for fun activities in the area. Boat trips will take you out to spot puffins, you can cycle along the Northumberland Coast Path or go Stand-Up Paddleboarding past nearby Warkworth Castle!

Amble is also famously called the friendliest port in England after the town’s residents sent a telegram to the RMS Mauretania on her final voyage to the breaker’s yard in the 1930s. The town sent a telegram saying “still the finest ship on the sea” to which the Mauretania replied, “to the last and kindliest port in England, greetings and thanks”.

Morpeth is a historic market town in Northumberland which offers many interesting sights, as well as ample opportunities for shopping, drinking and dining.

Even though there are some very modern and upmarket shopping arcades in Morpeth, they have been built to fit in with the ‘old market’ style of the historic town. While many visitors head to Morpeth for some retail therapy or fine dining, there are also a number of historically significant buildings to explore.

The 13th-century Chantry Chapel houses an interesting bagpipes museum while the Grade 1 Listed Morpeth Castle (pictured below) is now a holiday rental home that you can actually stay in!

Morpeth is also home to numerous stunning estates and gardens, including the must-visit Carlisle Park, which is a Tudor-style garden that’s home to one of only four working floral clocks in the UK.

Have we missed any of your favourite places to visit in Northumberland?