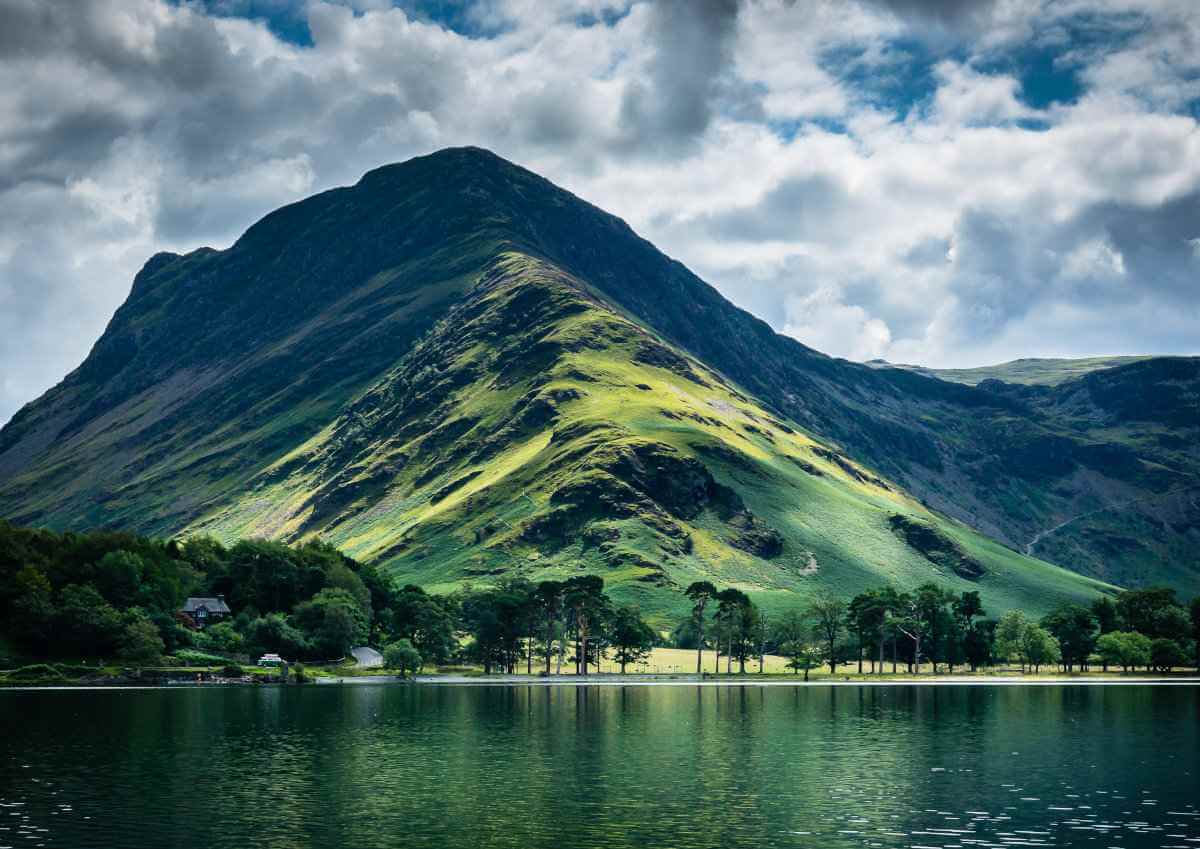 From the peak of Scafell Pike to the shores of Lake Windermere, those looking for places to visit in the Lake District will never run out of stunning views!

The Lake District is most known for its beautiful lakes (duh!) but there’s more to discover in this gorgeous area than just lakes.

In this post, we’ll be sharing our top picks for places to visit in the Lake District including the prettiest towns and homes of famous former residents.

We hope you enjoy learning about this magnificent region and be sure to let us know in the comments which Lake District must-sees we should add to our list!

The Lake District National Park is the largest national park in England and Wales, and the second-largest in the United Kingdom (after the Cairngorms in Scotland). It’s also the most-visited national park in the UK, probably because it’s filled with so much natural beauty.

Most of the Lake District is located within the national park, although there are a few small sections outside the boundary of the park. One of the reasons it’s so popular is because of the many pretty places to stay as well as the wide variety of activities for visitors to enjoy.

Lake Windermere is the largest natural lake in England and one of the most popular Lake District destinations. It’s a long, thin lake, at 18km (11 miles) long and 1.5km (1 mile) at its widest point.

Many visitors to the Lake District head to Lake Windermere to get out on the water, with plenty of options for swimming, canoeing, kayaking, rowing, motor boating or going on cruise boats to enjoy the scenery; including the 18 islands on the lake.

There are also many walking routes around the lake where you can experience the majestic scenery of the Lake District. The two towns of Windermere and Bowness-on-Windermere are close together on the east bank of the lake, and both provide a lovely base for exploring the area around Lake Windermere.

Wray Castle, on the western side of the lake, is another popular spot. It’s a neo-gothic castle from the 18th-century with impressive turrets and towers, plus it offers stunning views over the lake.

Nestled at the head of Lake Windermere, about a mile inland from the lake, Ambleside is one of the best places to go in the Lake District for a first-time visit.

It’s a charming English village filled with pretty brick buildings, some of which are managed by the National Trust. The Bridge House, in particular, was built over Stock Ghyll (a stream that runs through Ambleside, pictured below) around 300 years ago. There are still some working watermills in Ambleside on Stock Ghyll as well.

Just outside of Ambleside is Stockghyll Force, a series of waterfalls that can be reached via a lovely walk along the riverside. There are many popular walks and mountain hiking trails which can be reached easily from Ambleside, which means it’s often used as a base for visitors who want to hike and/or spend time on Lake Windermere.

Another of the most beautiful places to go in the Lake District is the village of Grasmere, as well as the lake next to it known as Grasmere Water.

English Romantic poet William Wordsworth lived with his sister in Grasmere between 1799 to 1808. Wordsworth’s wife joined them in 1802 before the whole family moved in 1808, after the addition of three children.

Their former home, Dove Cottage is now open to the public as a museum, showing how it looked when the Wordsworths lived there, right down to their preferred ‘wild’ garden.

The village of Grasmere is also famous as the home of Grasmere Gingerbread, which visitors have to try! While Grasmere Lake is one of the smaller Lake District lakes, it’s also quite idyllic. Grasmere can only be explored by rowing boats since motorboats are banned.

Rydal Mount is one of the most important Lake District attractions for fans of William Wordsworth. Located in the town of Rydal (close to Ambleside) this is where Wordsworth lived with his family from 1813 until his death in 1850.

After the Wordsworths left Dove Cottage they spent three years living in Allan Bank in Grasmere before moving to Rydal Mount to accommodate their growing family. The Lake District is indelibly linked with the life and work of Wordsworth, so a visit to the place he worked is a must for fans of the Romantic poet.

Since Rydal Mount is now also a museum, visitors can explore many of the rooms as they would have been when the family was living there. The house and gardens offer gorgeous views of both Grasmere and Windermere. The four-acre gardens that Wordsworth designed are also stunning and it’s easy to see how the landscape of the Lake District inspired so much of his work.

The former home of Peter Rabbit author Beatrix Potter is now one of the most-visited Lake District tourist attractions. Potter bought the farm of Hill Top in 1905, after her initial success as a children’s book author, and also using part of an inheritance from an aunt.

As a child, she had spent many summers in the Lake District and apparently had long wanted to live in the “charming village” of Near Sawrey. While the famous first book The Tale of Peter Rabbit was written long before she bought Hill Top, many of her later books were clearly inspired by locations around the village and her enjoyment of living in the country.

After purchasing Hill Top Beatrix Potter went on to buy many farms in the area, where she bred Herdwick Sheep. She was also very passionate about conservation and left nearly all her property to the National Trust when she died.

After her husband’s death, he left the remainder to the National Trust. Together, they are a big part of the reason that the Lake District National Park exists at all!

Ullswater is the second-largest lake in the Lake District and like Windermere is also a ribbon lake, so it’s long and thin. William Wordsworth’s poem “I Wandered Lonely as a Cloud” (one of the most famous poems in the English language) was apparently inspired by seeing daffodils growing on the shore of Ullswater.

One of the main attractions for visitors to Ullswater is the Ullswater Steamers, a historic ferry boating company which used to use steam-powered ships, although most have been converted to diesel in recent years. One of the ferries, the MY Lady of the Lake, is believed to be one of the oldest still-working passenger ferries in the world, even though she has sunk twice and even been damaged by fire!

As well as scenic rides on the ‘steamers’, Ullswater has small villages on its shores where rowing boats, canoes and kayaks can be rented. The Ullswater Way is a 20 mile (32 km) walking route all around Ullswater, that’s not too challenging but provides spectacular views.

Derwentwater is another one of the principal lakes in the Lake District and, like nearly all of them, is very scenic. It’s surrounded by hills (known locally as fells) and contains a number of small islands, one of which is inhabited.

There are many walking paths around the lake, so visitors can enjoy exploring spots like Friars Crag, Surprise View and Lodore Falls for sights of natural beauty. Boats can be hired at the small towns on the banks of Derwentwater and there are seven different marinas where passengers can hop between parts of the lake on the Keswick Launch.

The Lingholm Kitchen & Walled Garden on the western bank of Derwentwater is an ideal stop for a meal, as the original walled garden is thought to have inspired some of the scenes from Beatrix Potter’s stories. Even today, the walled garden looks very similar to Mr McGregor’s garden!

Keswick is a charming town located at the northern tip of Derwentwater. It’s also home to one of the most unusual places to visit in the Lake District: The Derwent Pencil Museum!

Yep, you read that right, a museum dedicated to the humble pencil, which is housed in a replica graphite mine and features some interesting exhibits, including the largest pencil in the world. The Keswick Museum and Art Gallery has a number of local artefacts on display so visitors can learn about the history of the area (beyond pencil manufacturing).

Keswick is also known for the Theatre by the Lake, which puts on up to nine productions of classic, modern and new plays on its two stages each year. The nearby Alhambra Cinema is one of the oldest continuously functioning cinemas in England and often shows live screenings from the National Theatre or Royal Opera House.

Another one of the more unusual things to see in the Lake District is the Castlerigg Stone Circle, which is located on a hill just outside Keswick.

Like most ancient stone circles in the British Isles, it’s not known exactly why the Castlerigg Stone Circle was constructed, but it’s thought to be around 5,000 years old – that’s even older than Stonehenge! The stone circle of Castlerigg is very visually impressive, with views of some of the highest mountains in the Lake District as a backdrop.

Next door to the Castlerigg Stone Circle is the Keswick Climbing Wall, which is a facility for rock climbing that also has an outdoor activity centre offering a high ropes course and a tower with a zipline. The Lake District is known as the home of rock climbing, so this is a very picturesque spot to give it a try.

A village has been located on the site since around the 2nd century and it was used as a Roman naval base. At almost four metres high, the remains of the bathhouse at the Ravenglass Roman Fort are some of the tallest still surviving Roman structures in northern England.

Today the town of Ravenglass is the home of the Ravenglass & Eskdale Railway, where visitors can ride a steam train to the foot of England’s highest mountains, with plenty of stops along the way. There’s also a museum in Ravenglass all about the history of the local railways and surrounding area.

Have we missed any of your favourite places to visit in the Lake District?