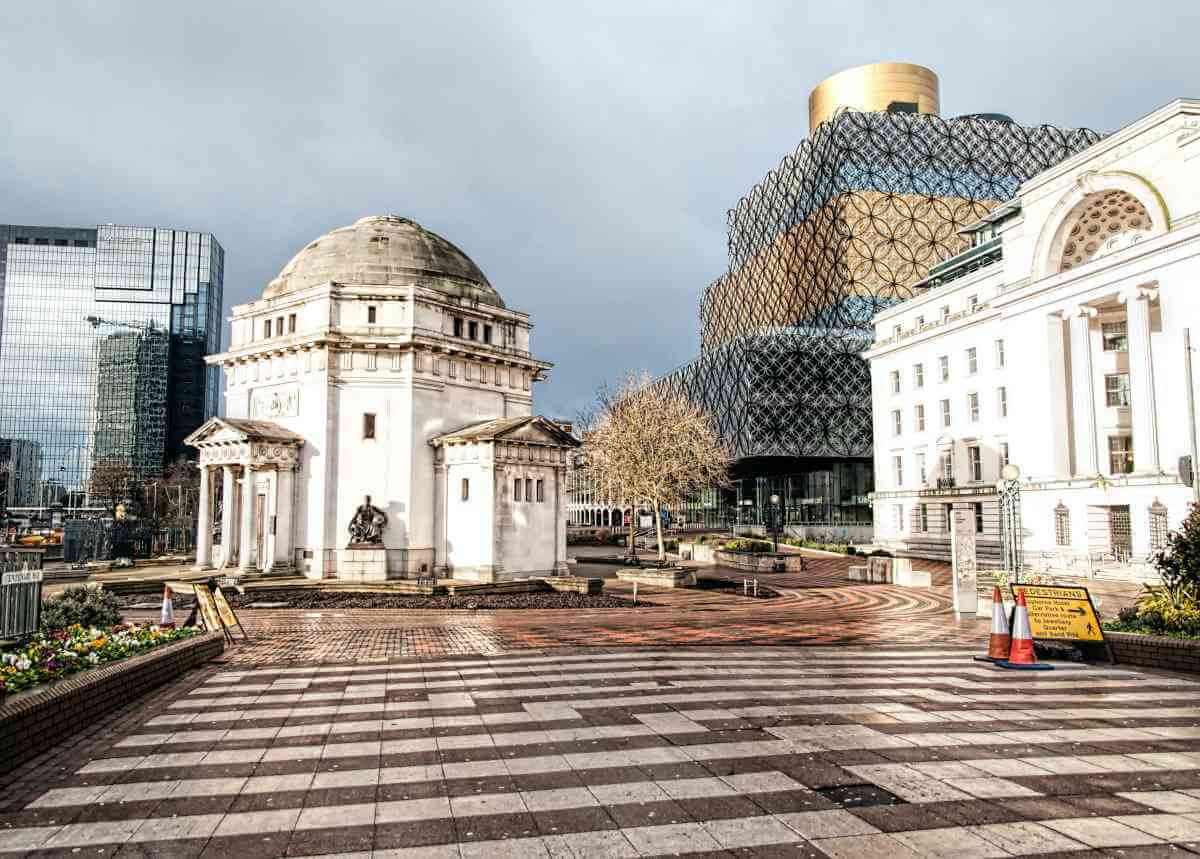 From picturesque canals and covered arcades to the world’s largest Primark, those looking for places to visit in Birmingham have plenty of options to choose from.

And while Birmingham is often overlooked as a destination for visitors, we’d argue that it’s well worth a visit for its unique history, attractions, and awesome Christmas market.

Originally a market town, during the Industrial Revolution Birmingham became an important manufacturing hub, even being called “the first manufacturing town in the world” around 1791.

While throughout the course of the Blitz, over 1800 tonnes of bombs were dropped over Birmingham (making it the 3rd most bombed city in the country after London and Liverpool), extensive rebuilding has led to Birmingham becoming a very modern city.

Today, visitors can experience a unique mix of cool modern architecture, alongside historic buildings, and plenty of great places to visit.

Intrigued? In this post, we’re rounding up all the most interesting and unusual places to visit in Birmingham, but let us know in the comments if there are any Birmingham must-sees we should add to this list!

When it comes to eye-catching Birmingham attractions, every visitor’s first stop needs to be the Library of Birmingham.

It’s a post-modern and high-tech building, which looks kind of like a four-tiered cake floating in the air, or kind of like a tugboat, depending on how you look at it… with circle designs on the side inspired by the city’s history of metalwork.

The sculpture of two women and children outside the library was unveiled in 2014 and depicts a ‘Real Birmingham Family’. Two real-life sisters and their sons were chosen from hundreds of applicants to show that the idea of family isn’t fixed.

Be sure to head up to the 9th floor of the library as well for a really great hidden gem – the Shakespeare Memorial Room, which is definitely one of the best places to visit in Birmingham if you’re a fan of the legendary Bard!

It’s located inside the golden rooftop rotunda and contains the library’s collection of works by Shakespeare. The room’s interior is a delight of Elizabethan-style woodcarvings and metalwork depicting birds, flowers and foliage.

A Baroque Church built in the early 18th century, St Philip’s Cathedral is a Grade I listed building and the seat of the Bishop of Birmingham.

While the cathedral was completely bombed during World War II, the Birmingham Civic Society had the foresight to remove many of the most important treasures of the church in the war’s early days, which is why you can still admire many of them today. The stained glass windows by Edward Burne-Jones are especially noteworthy.

The design of the church was inspired by the designer (Thomas Archer)’s travels in Rome, hence why the church has a rather Italianate design. Archer was particularly influenced by the churches of Francesco Borromini, an Italian architect who partially led the movement of Italian Baroque architecture.

If you’re looking for things to see in Birmingham that are nice and close together, then you definitely should head to Victoria Square. This public square is usually considered the centre of Birmingham, plus it’s where you can find the Town Hall, Council House, Birmingham Museum & Art Gallery, Victoria Square House and a number of impressive sculptures, as well as a Christmas market during December!

The Birmingham Town Hall was built to look like a Corinthian temple and is famous for its huge concert pipe organ. The hall has also been the location of many concerts over the years, with headliners such as The Beatles, Led Zeppelin, Queen, Pink Floyd, Black Sabbath, The Rolling Stones and Bob Dylan having performed there.

Next to Victoria Square is Chamberlain Square, where a memorial fountain for Joseph Chamberlain (pictured below with the Birmingham Town Hall behind it) was unveiled in 1880.

Joseph Chamberlain was a manufacturer and businessman who became mayor of Birmingham and was a renowned British politician. His son, Neville Chamberlain, was Prime Minister between 1937 and 1940.

Once home to a luxury cinema, today the Piccadilly Arcade is a hub of independent shops. This arcade is one of our favourite places to visit in Birmingham thanks to its unique ceiling murals painted by Paul Maxfield.

The building was originally a cinema which opened in 1910. While it was transformed into a shopping arcade in 1923, it’s still possible to see the sloped floors where once there were rows of seats and a cinema screen.

Nowadays, Piccadilly Arcade houses many modern stores, however a number of them retain their classic shopfronts. It’s open seven days a week and located just a short stroll from Birmingham New Street Station, so be sure to stop by if even just to snap a quick photo.

If you’re a fan of covered passages, another must-see in Birmingham is the Great Western Arcade.

Tucked away between Colmore Row and Temple Row, you’ll find this beautiful Victorian passageway, known for being a hub of independent retailers.

Great Western Arcade was originally built in the 19th century, with a barrel-vaulted roof and central dome similar in design to the iconic Galleria Vittorio Emanuele II in Milan. Unfortunately, the roof had to be replaced following destruction during World War II.

That’s not to say the passage doesn’t retain much of its historic charm. For instance, the plaster mouldings above the doors on the balcony are original, as is the stone masonry on Temple Row.

Standing since 1368, The Old Crown is a Birmingham institution known as not only the city’s oldest pub but also its oldest secular building.

Originally built as a Guildhall, the building was used as an inn – where Queen Elizabeth I is reported to have stayed in 1575 – before being converted into two and then three houses in the 1600s. In 1991 it was bought by a local pub company, restored to its former glory and reopened as a historic pub and events garden.

Over the centuries, the Old Crown has survived battles, wars, and pandemics, while today it continues to serve up pints and yummy pub grub for weary patrons. It’s definitely the best pub to stop at while in the city!

Birmingham’s Hall of Memory is an elegant war memorial dedicated to people from Birmingham who were wounded or gave their lives during WWI, WWII and in active service since 1945. It’s located in Centenary Square, adjacent to the Library of Birmingham.

It was constructed almost entirely by workers from Birmingham and features four larger-than-life bronze statues on granite pedestals to represent the Army, Navy, Air Force and Women’s Services. The statues were also created by a local artist, Albert Toft.

Once visitors go in through the cast bronze doors they will find a shrine with two caskets containing two books, the First World War and Second World War Roll of Honour. There’s also a beautiful stained-glass window, along with Art Deco bas-relief plaques depicting scenes from the First World War.

With 35 miles of canals in the city centre and over 100 miles throughout the entire Metropolitan area, it is said that Birmingham’s canal network is larger than even that of Venice. And while you’ll be hard-pressed to find romantic gondolas bobbing around Birmingham, one great place to admire the city’s canal (and some cute narrow boats) is the Gas Street Basin.

Gas Street Basin is where two major canals met, and a barrier called the Worcester Bar was built to stop the water mixing. Worcester Bar now features many narrow and colourful boats moored to it, some of them even lived in!

Once playing an instrumental role in transporting raw materials during the Industrial Revolution, today the Gas Street Basin is one of the best places to see a mix of old and new in Birmingham. The canals are lined with pubs, bars, cafés and restaurants in the listed buildings, with a backdrop of modern high-rise offices.

While the Custard Factory used to make instant custard, today it is known as Birmingham’s creative district, with many independent shops, cafés, bars, restaurants and even a cinema set in 15 acres of restored Victorian factories dating from between 1849 and 1922.

This area is one of the most popular Birmingham tourist attractions, particularly for any visitors who want to do some shopping, enjoy some food and drink, or see a film at the legendary Mockingbird Cinema.

There are also many creative businesses in the nearby buildings and a number of cool art pieces, including a giant tree-man. Most of the buildings feature art and fairy lights, plus it’s a fantastic spot to experience some of Birmingham’s nightlife.

If you’re looking for something pretty as a gift or for yourself, then the famous Jewellery Quarter is one of the best places to go in Birmingham for a spot of shopping!

This area is home to more than 100 diamond dealers and jewellery retailers, as well as beautiful Georgian architecture. There are also many other independent shops, along with plenty of trendy bars, art galleries and restaurants.

The Museum of the Jewellery Quarter is the best place to go to learn about the history of this part of the city, as it’s housed in a preserved jewellery workshop from 1981. There’s also a Pen Museum in the Jewellery Quarter, for those interested in calligraphy and pen-making, with interactive activities.

No, we’re not talking about seeing bullfighting, the Bull Ring is actually a major shopping centre and one of the top Birmingham destinations for visitors on a shopping spree.

There was originally a market on the site, which was called Corn Cheaping and contained a bull ring for bull-baiting. In the 21st century, the area was developed and renamed the Bull Ring, becoming the United Kingdom’s largest city centre-based shopping centre. There are two main buildings, called East and West Mall, connected by an underground passage that’s also lined with shops.

The 2.2-metre bronze sculpture of a bull is called The Guardian and can be found at the main entrance to the west building. Many big department stores are located within the Bull Ring, including Selfridges, Prada, Ted Baker, Zara and Debenhams.

While an unlikely contender for the most beautiful places to visit in Birmingham, the city’s central Apple Store is truly a sight to behold.

Housed in a historic Grade II listed building, this gorgeous store was originally a Midland Bank building, before becoming a 6-storey Waterstones and now one of the most beautiful Apple store locations in the world!

So trust us: the Apple Store in Birmingham has something to offer even if you’re not clamouring for a Genius Bar appointment.

Birmingham is a city known for excellent shopping opportunities, from the famous Bullring to yes, even its Primark, which is indeed the largest one in the entire world!

Spanning 5 floors and over 160,100 square feet, this colossal shop even has its own Disney-themed cafe on the top floor, along with a beauty studio, barbershop and three additional dining options. It’s also located right next to the Birmingham Moor Street Station, so you don’t need to lug your bags very far after a day of retail therapy.

… And yes, the Disney cafe is indeed quite good fun!

Have we missed any of your favourite places to visit in Birmingham?