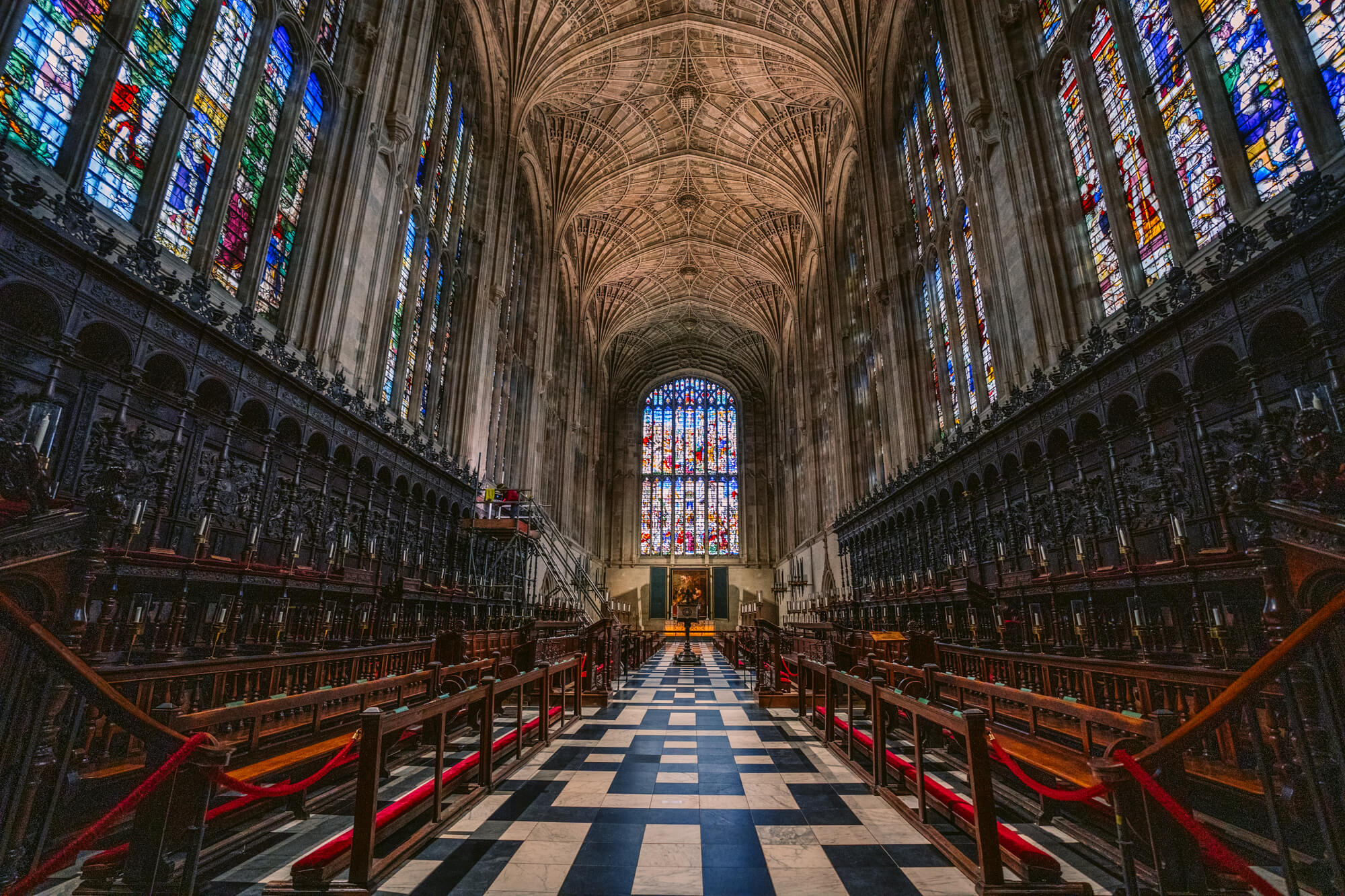 King’s College Chapel is a stunning marvel of late Perpendicular Gothic English architecture located in King’s College, one of the 31 constituent colleges of prestigious Cambridge University.

Famed for its glorious fan vaulted ceiling, ornate wooden features, and beautiful stained glass windows, this chapel is the oldest surviving building on King’s College grounds, and today is considered one of the top must-sees for tourists visiting from around the world.

In this King’s College Chapel guide, we’ll be covering all of the following:

For sightseeing purposes, public entry to King’s College Chapel is only possible through paying an admission fee for the entire college. You can save a bit of money by booking your tickets online in advance here.

According to the official King’s College website, here are the ticket prices (as of January 2023):

For the most accurate and up-to-date opening hours, be sure to check the King’s College calendar here.

Looking for somewhere to stay nearby while visiting King’s College Chapel? Here are some recommendations:

While visiting King’s College Chapel today, it can be difficult to imagine that its completion took nearly a century.

Why so long? Well, despite the fact that initial work began only five years after King’s College was founded by Henry VI in 1441, design work was soon halted due to the Wars of the Roses, a series of civil wars that raged on for decades.

Due to these disruptions, it is said that the Chapel’s construction can be divided into three key periods:

Phase 1 was very much dominated by the wishes of Henry VI, founder of King’s College, with work being led by the chapel’s first master mason, Reginald Ely. While additional stone was found and used later, Phase 1 construction is largely distinguished by its white magnesian limestone, and simple, religious carvings.

This phase came to an end in 1461 when (according to popular legend), masons working at the chapel heard about Henry VI’s defeat at Towton, and subsequently had no more motivation to work… leaving behind a stone that would later become the foundation stone for the Gibb’s building in 1724.

Upon Richard III’s death however, work stopped again due to a lack of funds, and would not resume until a sizeable donation by King Henry VII in 1508, AKA the start of Phase 3.

Master mason of Phase 3 was John Wastell, who many credit with bringing the chapel’s glorious fan vaulting to life. Surprisingly, the ceiling was completed in only three years – between 1512 and 1515. During this time, further elaborate elements were added, such as the Tudor-themed heraldic carvings in the Ante-Chapel.

By 1515, the chapel was considered complete… although further details and highlights would be added over the centuries, including a splendid Organ Screen courtesy of Henry VIII and a Rubens masterpiece courtesy of Alfred Ernest Allnatt… but more on these specific features a little bit later!

How to Get to King’s College Chapel

King’s College Chapel is conveniently located in the Cambridge city centre along King’s Parade here, on the King’s College grounds.

There is no parking on-site at King’s College, but there are a number of car parks close by that will put you within easy walking distance of the college and its chapel.

King’s College Chapel is located about a 25 minute walk from the Cambridge Train Station (which is located outside of Central Cambridge).

King’s College Chapel is located about a 15 minute walk from the Drummer Street Bus Station.

The Layout of King’s College Chapel

Spanning 88m (289 ft) long, King’s College Chapel is a sizeable chapel with plenty of features to admire. Here is a quick walkthrough of the different areas of the Chapel that visitors can look forward to.

Entry to the King’s College Chapel is through the North Porch, where visitors are instantly greeted with the grandeur of the chapel and its fan-vaulted ceiling looming in all its detailed glory high above.

Here, you are in the Ante-Chapel, where you’ll find heraldic carvings representing the armorial devices of the House of Tudor, including…

You’ll also be able to admire the West Window, which is the youngest of the King’s College Chapel windows, having not reached completion until the 19th century.

On the northern wall next to the entrance, you’ll find Whichcote Chapel, which is supposedly used for baptising members of King’s College.

Another chapel you can visit in this area is known as the Founders Chapel.

A highlight of this chapel is the vibrant painting La Deposizione by 16th century painter Girolamo Siciolante da Sermoneta.

And on the opposite wall, you’ll find another 16th century gem: an Antwerp triptych by the Master of the Von Groote Adoration, depicting of the Adoration of the Magi.

While it wasn’t open to the public during our visit, a final chapel to be discovered in this portion of the King’s College Chapel is the the Tomb Chapel, which houses several memorials.

Looking ahead towards the choir area of the chapel, visitors will encounter a dark oak screen housing the chapel organ which was gifted by Henry VIII.

Since the initials of both Henry VIII and his queen Anne Boleyn can be seen on the screen, we know this was likely added between 1533 (the year of their marriage) and 1536 (the year of Anne’s execution).

Halfway down the choir, you’ll find a brass lectern topped with a small statue of Henry VI, founder of King’s College. This was a gift to the college from Robert Hacumblen, who as a former provost for the college.

At the end of the choir, you’ll find the Great East Window, which depicts the passion and crucifixion of Christ.

The Adoration of the Magi

Directly under the Great East Window on the Sanctuary Altar, you’ll find one of the most revered highlights of the King’s College Chapel: a Rubens painting dating back to 1634 known as ‘The Adoration of the Magi’.

Originally painted for the Convent of White Nuns in Louvain, Belgium, the painting was donated to King’s College Chapel in 1961 by Alfred Ernest Allnatt.

The Chapel of All Souls

On the Southern side of the King’s College Chapel, you’ll find the Chapel of All Souls, which now serves as a memorial chapel for college members and staff who died in war.

From there, visitors can easily stop by St Edward’s Chapel, whose altar is crowned with a 16th century painting by Gert van Lon known as “Madonna in the Rosary”.

Following along the visitor route of the King’s College Chapel, next up are various educational displays in the side chapels which go into further detail about the chapel’s history and construction.

This is a great part of the chapel experience for visitors interested in learning more about how the chapel came to reach its present form. There’s a surprising amount to read, so be sure to take your time before heading back towards the exit of the chapel.

Planning to visit King’s College Chapel soon? Here are some additional tips to keep in mind.

You are welcome to attend these choral services if you plan your visit for the academic year, meaning…

Check out the official website here for more info.

Buy your tickets online in advance

Looking for discounted tickets to King’s College Chapel? You can save a bit of money by booking your tickets online in advance here. This will also save you a trip to the Visitor Centre, as tickets cannot be purchased at the entrance gate.

NOTE: We’d recommend keeping your King’s College entry tickets handy, as we were checked at the entrance gate and again once we walked into the chapel.

During exam time at Cambridge, college grounds are closed to visitors, so try to plan your visit outside of this period if possible.

While King’s College Chapel is sometimes still open to the public during this time, the rest of the college is not, so it would be best to visit another time so you can take full advantage of your entry ticket.

Use the facilities before visiting

Lastly, it’s worth noting that there are no public toilets on King’s College grounds, so be sure to use the bathroom before your visit!

We Hope You Enjoyed This Guide to King’s College Chapel!

Let us know in the comments if you have any more questions, or insider tips to add. We’re always looking to improve our articles for readers!