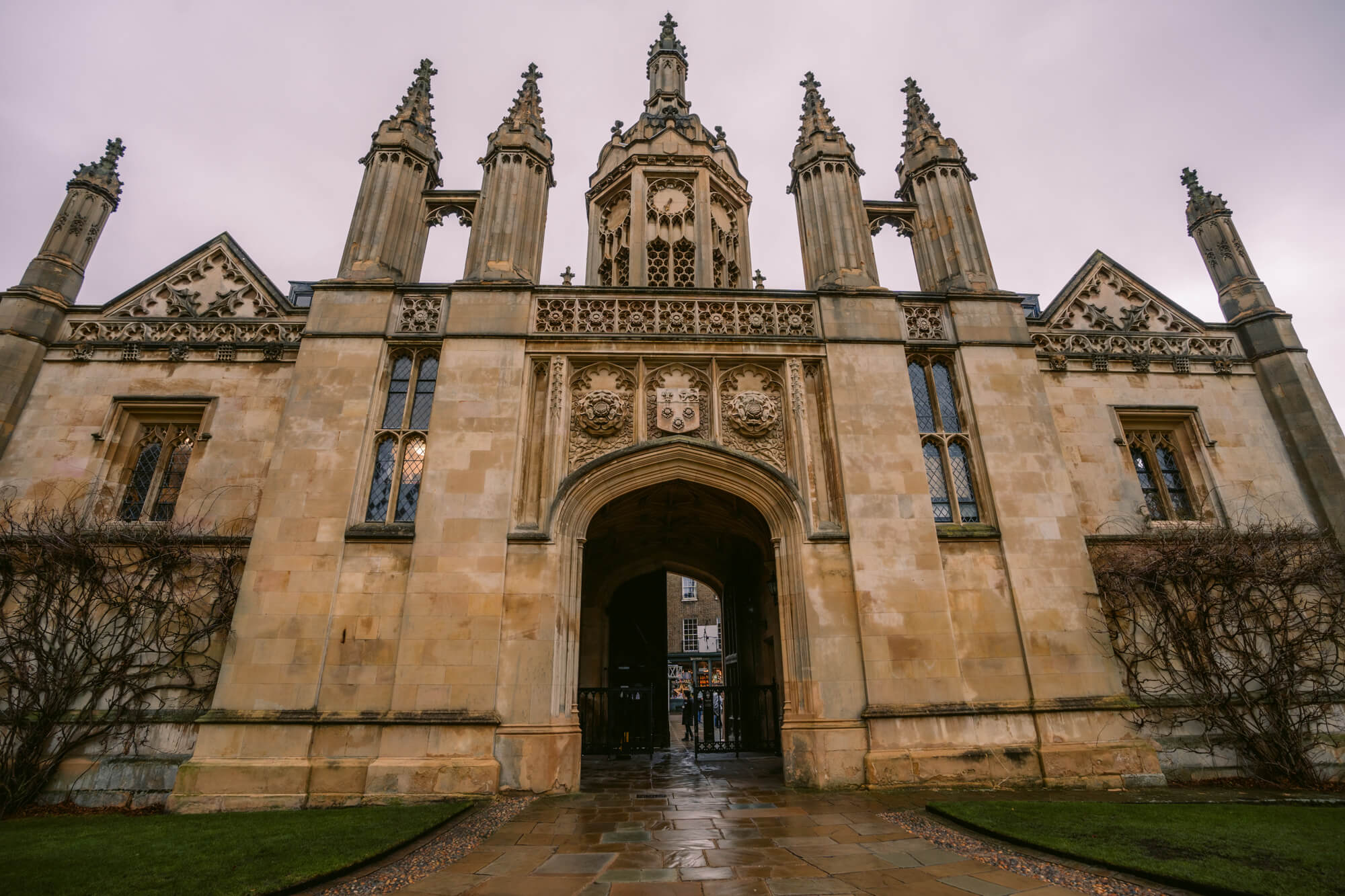 Of the 31 colleges dotted around the English city of Cambridge, King’s College may well be the most popular among visitors, earning a top spot on many tourist bucket lists and itineraries.

Famed for its stunning Gothic chapel (home to the world’s largest fan vaulted ceiling), as well as its picturesque grounds, King’s College is definitely one of the prettiest colleges to visit in Cambridge, especially for those eager to ooh and ahh over some of the most photogenic structures in the city.

So, if you’re keen to see the very place that helped nurture famous minds like Alan Turing, Zu Zhimo, and Salman Rushdie, read on.

In this King’s College Cambridge guide, we’ll be covering all of the following:

Public entry to King’s College is only possible through paying an admission fee. You can save a bit of money by booking your tickets online in advance here.

According to the official King’s College website, here are the ticket prices (as of January 2023):

For the most accurate and up-to-date opening hours, be sure to check the King’s College calendar here.

Looking for somewhere to stay nearby? Here are some recommendations:

Originally founded in 1441 as “The King’s College of Our Lady Saint and Nicholas in Cambridge”, King’s College has enjoyed a lengthy history over the centuries, persevering through wars, conflicts, and global pandemics.

The college was originally established by King Henry VI as a finishing school for students from Eton College, of which the top 70 worthiest were recruited each year to join King’s. The college would remain Eton-exclusive for over 400 years until 1861, when a new set of statutes opened up admission to those from other schools.

Today, King’s College is home to over 100 fellows and 400+ undergraduate students, many of which live and work on the college grounds.

Of course, the King’s College we see today looks significantly different to how it would have looked back in the day. While construction on the famous King’s College Chapel began only five years after the founding of the college, its completion would not be reached until almost 100 years later thanks to the War of the Roses.

Besides the chapel, the college would see a great deal of expansion and development over the next few centuries. The now iconic neoclassical facade of the Gibbs Building for example wasn’t completed until 1724, and it took until the early 19th century for the front court to be completed.

But of course, good things come to those who wait. These days, King’s is widely regarded as one of the most beautiful colleges in Cambridge… certainly among visitors, who come by the thousands every year to see the beauty of the college and chapel for themselves.

How to Get to King’s College Cambridge

There is no parking on-site, but there are a number of car parks close by that will put you within easy walking distance of the college.

King’s College is located about a 25 minute walk from the Cambridge Train Station (which is located outside of Central Cambridge).

King’s College is located about a 15 minute walk from the Drummer Street Bus Station.

Things to Do at King’s College Cambridge

Wondering what there is to do during your visit to King’s College in Cambridge? Here are some fo the must-sees.

Of course, the starring attraction at King’s College is the King’s College Chapel, home to the world’s largest vaulted ceiling, and considered by many to be a true masterpiece of Gothic architecture.

Besides the beauty of the chapel itself, there are also a number of informative displays available for visitors to learn about the history of the college, chapel, and its construction.

Of course another highlight is the Adoration of the Magi painting by Rubens, which was gifted to the college by property millionaire Alfred Ernest Allnatt in the early 1960s. Visitors can now view it in the eastern part of the chapel.

And if simple sightseeing in the chapel doesn’t feel like enough, visitors are also welcome to attend services and choral performances inside the chapel. Click here for more information about attending.

Gawk at the grounds

As the college is a working college, many parts are off-limits to public visitors, such as the Gibb’s Building, Wilkins Building, Old Lodge, and both Bodley’s Court and Chetwynd Court.

That said, some of the building exteriors are still stunning to admire from the outside, especially the Gibb’s Building which has a beautiful classical facade made of Portland stone.

Stretching from the King’s College Chapel to the scenic banks of the River Cam, another highlight for visitors to King’s College is the lush wildflower meadow, where (when the timing’s right) you’ll find a sea of poppies, cornflowers, mayflowers, corn cockles and more.

Officially opened in 2018, another King’s College attraction is the Xu Zhimo Memorial Garden, the first Chinese garden to be installed in any of Cambridge’s colleges, dedicated of course to the famous Chinese poet Xu Zhimo, who once spent 18 months at King’s College.

Populated with a mix of British plants and plants from Xu’s home region of Haining, China, this tranquil piece of King’s College is well worth a visit.

Nearby the garden, you’ll also find a white marble memorial stone dedicated to Xu, which is engraved with lines from his famous poem ‘Second Farewell to Cambridge’, which is now a poem so famous in China that it is studied by millions of students each year as part of many school curriculums.

Last but not least, here are some practical tips to keep in mind before your visit to King’s College.

Buy your tickets online in advance

During our visit, we noticed that ticket purchases were not possible at the entrance gate, and instead you needed to go to the Visitor Centre across the road. Not a huge distance to travel, but you’re better off buying your tickets online because then you can guarantee your entry (they can sell out quickly during peak season!) and you save a tiny amount on the entrance fee as well.

NOTE: We’d recommend keeping your tickets handy, as we were checked at the entrance gate and again upon entry to the chapel.

Do not visit during mid-April to mid-June (Easter Term)

During this period, it’s exam time at Cambridge, so College grounds are closed to visitors (although the Chapel is usually still open).

Use the facilities before visiting the college

At King’s College, you will not find any toilets or bathrooms open to the public, so be sure to take care of business before your visit!

Keep off the grass!

According to some wordy signs, walking on the grass is only possible if you are accompanied by a senior member of the college. You’ve been warned!

We Hope You Enjoyed This Guide to King’s College Cambridge!

Let us know in the comments if you have any more questions, or insider tips to add. We’re always looking to improve our articles for readers!