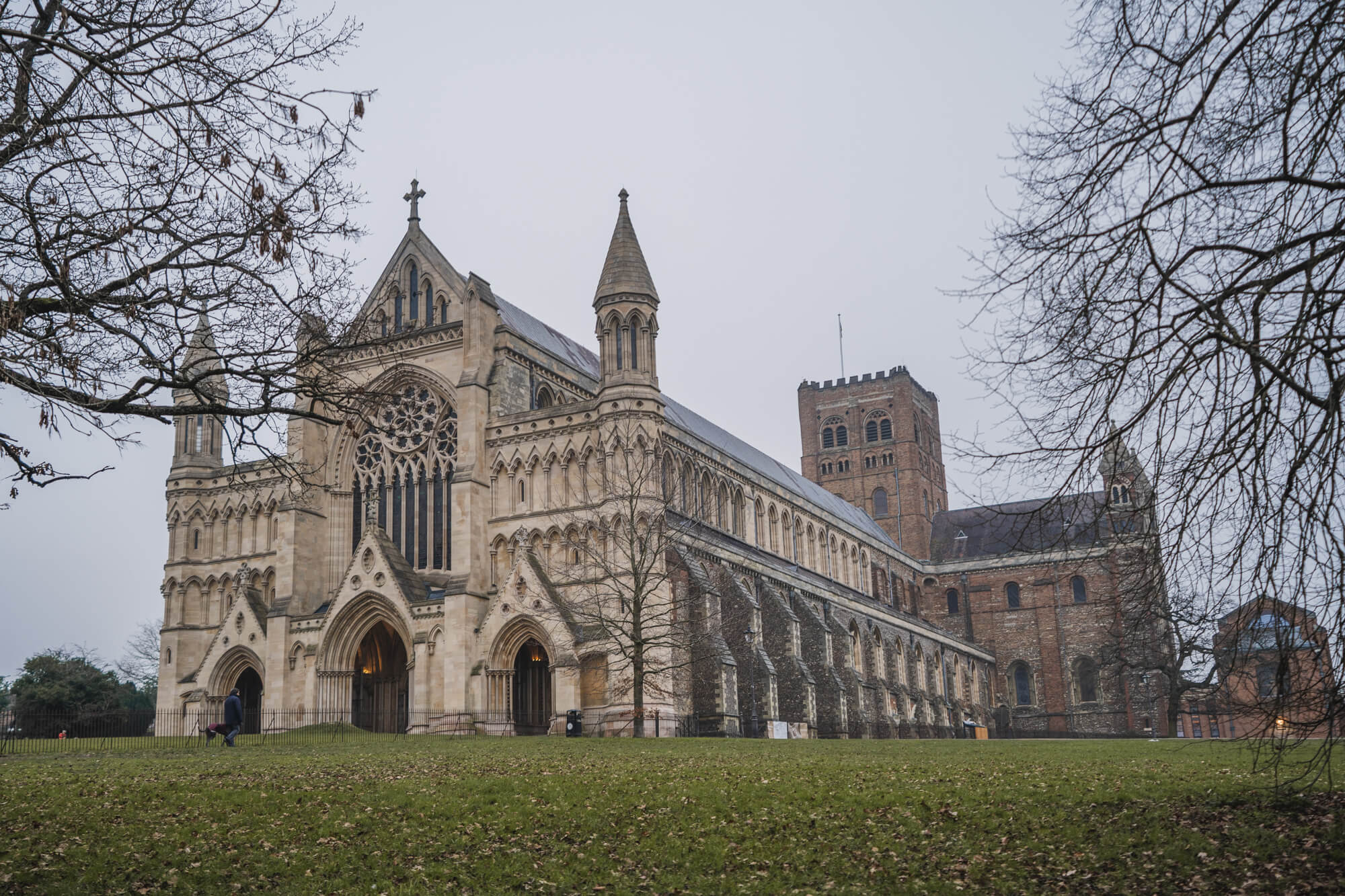 From Roman ruins to medieval structures, those looking for impressive places to visit in St Albans will find plenty to enjoy.

St Albans is best known for the first British Saint, Alban, (and the cathedral dedicated to him) but there are many more things to discover here than just the cathedral.

In this post, we’ll be sharing our top picks for places to visit in St Albans, including must-sees for Roman history buffs, and the occasional quirky spot.

We hope you enjoy learning about this historic city and be sure to let us know in the comments which St Albans must-sees we should add to our list!

Let’s start with the obvious, shall we?

The stunning Saint Albans Cathedral is of course one of the main St Albans tourist attractions you must visit during your stay, especially since both it and the town were named after Britain’s first saint, Alban.

Alban lived in the Roman city of Verulamium (which was slightly southwest of where St Albans is located today), sometime during the time period between the 3rd and 4th-centuries when Christians were being persecuted by the Romans.

As the story goes, Alban sheltered a Christian priest who was fleeing his persecutors and was apparently so impressed by the priest’s faith that he also converted.

When the Romans came to search Alban’s house for the priest, he put on his cloak and presented himself instead, after which he was executed, thereby becoming the first Christian Martyr in Britain’s history.

Around 793 AD, a Benedictine Abbey was built near the spot where Saint Alban was executed, which was then changed to a church and later a cathedral after the dissolution of the monasteries.

Today, St Albans Cathedral is not only famous for venerating Britain’s first saint, but it’s also a stunning example of Romanesque and Gothic architecture, as well as housing the longest nave of any cathedral in England. This beautiful cathedral is by far one of the most important must-sees when you visit St Albans, so make sure you don’t miss it!

Another one of the most visited St Albans attractions you should add to your list? The St Albans Clock Tower, which happens to be the only remaining medieval town belfry in England.

Where did this tower come from? Well, it was originally built by the people of St Albans as a symbol of their resistance against the power of the abbot (i.e. the head monk of the abbey). By constructing this tower, the townspeople themselves had the ability to sound their own hours.

The building was completed in 1405, (pettily) facing the abbey of St Albans.

Centuries later, the clock tower continues to stand as a symbol of rebellion, with its main bell (named Gabriel) in use for over 600 years, famously ringing out for the first Battle of St Albans during the Wars of the Roses in 1455.

And while during the 1800s, the clock tower fell into disrepair, it was later restored with the addition of gargoyles, new windows and a new clock mechanism, making it the beautiful structure we see today. These days, you can even climb it, but even if you don’t make it inside, it’s still well worth a quick look, especially if you’re already near the cathedral.

PRACTICAL INFORMATION FOR VISITING: Visitors can climb up 93 narrow steps to enjoy views over St Albans for £2, although it’s only open to the public on weekends (and Bank holidays) between Easter and September.

One of the most unusual places to visit in St Albans is the Ye Olde Fighting Cocks pub, which is also one of the (allegedly) oldest pubs in England.

Quite a few different pubs lay claim to being the oldest in England, without there being a definitive word on THE oldest, but Ye Olde Fighting Cocks is definitely old. It’s estimated that the building was originally built during the 11th-century, with humble origins as a pigeon house. By 1756, it was trading as a pub called The Three Pigeons.

It wasn’t until the 18th century that the name was changed to the Fighting Cocks, because cock fights were held on the premises, and the ‘Ye Olde’ affectation became popular in the Victorian era.

Besides a delightful name, this pub has also enjoyed its fair share of screen time – shots of the pub can be seen in an episode of Inspector Morse, as well as a scene in the series After Life with Ricky Gervais.

In 2022 it was reported that Ye Old Fighting Cocks had gone into administration (closed down), but it has since re-opened for all to admire!

The beautiful Veralumium Park is our top pick for places to go in St Albans if you need some time to enjoy the outdoors.

Verulamium Park is located on the ruins of the Roman city of Verulamium, with parts of the ancient city walls and the London Gate still visible. Along with these sights, the park offers up 100 acres of open space, children’s play equipment, a lake, a café and sporting facilities.

The Roman Hypocaust is also located within the park, while the Verulamium Museum is just on the outskirts – more on both of those in a minute! The Lake in Verulamium Park is man-made and home to many waterbirds, from ducks and swans to herons and grebes.

A visit to Verulamium Park is ideal in summer, whether you want to explore the Roman history of St Albans, have a picnic and feed the ducks, or just relax!

… Although a gloomy winter walk here has its charms too:

If you’re interested in the Roman history of England, then the Verulamium Museum is one of the best places to visit in St Albans you must add to your list.

It’s located inside what was once the Roman Forum of the city of Verulamium and houses a variety of objects that demonstrate everyday life in Roman Britain. There are many artefacts such as pottery, jewellery, tools and coins from the Roman period on display, along with some of the finest Roman mosaics outside Italy!

On the opposite side of the road from the museum (behind St Michael’s Church) are the ruins of Verulamium’s Roman Theatre, which is apparently the only fully excavated Roman Theatre with a stage, rather than an amphitheatre, in England.

The Roman Mosaic and Hypocaust

Another one of the best St Albans destinations for examples of Roman history is the Roman Mosaic and Hypocaust, located within the bounds of Verulamium Park.

A hypocaust was an ancient Roman central heating system and the one in St Albans is one of the best examples of Roman engineering that can still be seen today. A hypocaust is basically a room underneath a building, where a furnace was kept burning so that heat could circulate up through the floor and sometimes through pipes in the walls.

It was expensive to run a hypocaust, so they were usually reserved for public bathhouses or large, expensive villas. It’s believed that the hypocaust in St Albans was part of the reception and meeting rooms of a large townhouse, built around AD 200. There is also an intricate and beautiful mosaic all over the floor.

Discovered during excavations in the 1930 by Sir Mortimer & Tessa Wheeler, today the Hypocaust is housed in a modern building and is free to visit.

For those into art and history, the St Albans Museum and Gallery is one of the best places to go in St Albans if you’re looking for a spot of culture.

Unlike the other museums we’ve mentioned, this one focuses on the history of the city of St Albans, but not on the Roman aspects of that history. The museum and gallery are located inside what was once the St Albans Town Hall, a neo-Greek building which included an assembly room, courtroom and cells in the basement.

While the building was completed in 1831 and remained the heart of the city for years, in 1966 a new civic centre was constructed, rendering this building redundant. It has been lovingly restored for visitors to enjoy history and art amongst the original architecture; we particularly like the courtroom café.

PRACTICAL INFORMATION FOR VISITING: The St Albans Museum and Gallery is open every day from 11am – 5pm and is free to visit.

Lastly, while not in St Albans proper, we had to include a beautiful estate you can visit less than 20 minutes away – Hatfield House.

This beautiful Jacobean House has been featured in a number of productions over the years, from Bridgerton to Batman Begins, and is usually included on lists of things to see in St Albans.

Hatfield House is a country house and estate, built in 1611 by Robert Cecil, the 1st Earl of Salisbury who served as the Lord Privy Seal for both Queen Elizabeth I and King James I. The estate includes multiple stunning formal gardens and a woodland park, with a herd of menil fallow deer.

Many (and we mean many!) films and television series have used Hatfield House as a filming location, check out this long list if you’re wondering where you’ve seen that exterior before!

PRACTICAL INFORMATION FOR VISITING: There are quite a few different house, garden and park sections at Hatfield, with differing opening times and prices. Check the website before you go to ensure that what you want to see will be accessible.

Did we miss any of your favourite places to visit in St Albans?

Let us know in the comments so we can add more St Albans must-sees to our list!